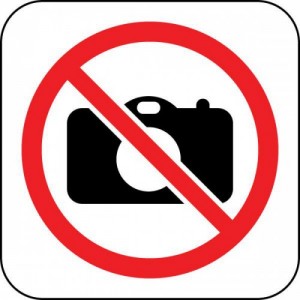 According to the still very useful UTEHA dictionary, photophobia is a medical term which means discomfort or pain to the eyes due to light. But the photophobia of my story has nothing to do with medical apprehension, but rather with social apprehension.

More and more I am hearing about people who want to take photos in public places and are told that it’s prohibited. It’s not a matter of taking photos of military units or the movement of troops, no. On a public street, in a pharmacy, in the agro-market, in a maternity hospital, in a night club, a stern employ arrives who threatens the photographer, who, generally, abides by the absurd order.

This paranoia can’t be spontaneous, it has to obey “training passed down”, where behind every camera lens could be hiding, horror!, an independent journalist, which is to say, a CIA agent.

The citizens, of course, say that in order to have legal force, the said prohibition has to be clear and very visible, and be endorsed by a resolution and not by the caprice of an administrator, director or the police.

If there is nothing to hide, why the fear?