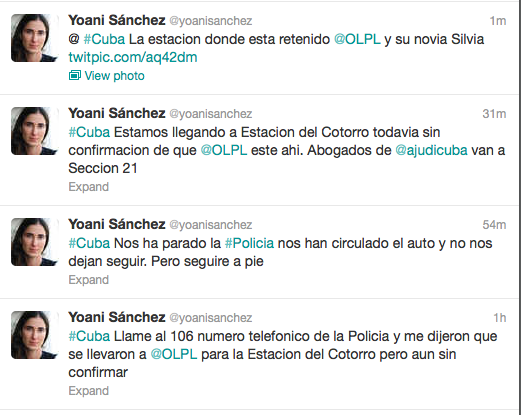 1 minute: The station where OLPL and his girlfriend Silvia are being held.

31 minutes: We are arriving at the Cotorro Station still with no confirmation that OLPL is there. Attorneys from the Cuban Law Association are going to Section 21. [Readers: See post below]

54 minutes: We have been stopped by the police, they are surrounding the car and won’t let us continue. But we continue on foot.

1 hour: I called the 106 police number and they told me OLPL was taken to the Cotorro Station but still no confirmation.

Translator’s note: Tweets from others suggest additional people might have been arrested with OLPL and Silvia — we will confirm when we have information.