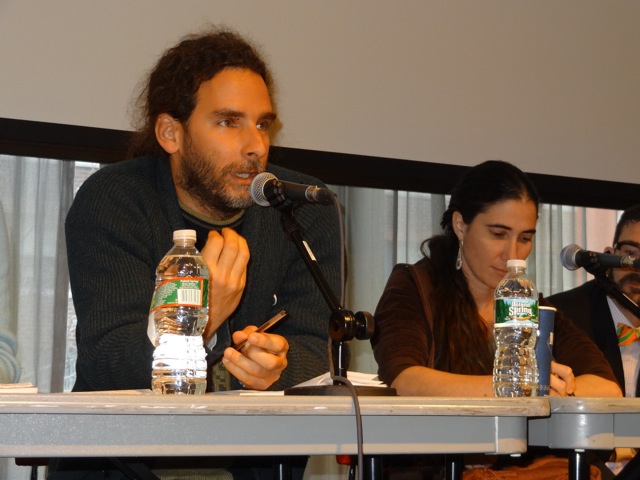 Last month, social activist Yoani Sánchez (blog Generation Y) and I became the first pro-democracy bloggers that, while still living in Cuba, were allowed to visit and speak freely in USA.

We were welcomed in Washington by U.S. Congressmen, and by ministries of the White House and the State Department. During the last half century of the so-called Revolution, such behavior has been considered by our government as a declaration of war. This is why the solidarity of the international community is so important under these unprecedented circumstances.

As part of the Cuban State’s efforts to silence us, our presentation to U.N. journalists in New York was boycotted from Havana. Via a top-level protest (supported by anti-democratic nations), they denied us our right to speak in the scheduled public room. Instead, our speech took place in a tiny corridor, where Sánchez’s voice resonated like a ray of hope, and the world came to see how human rights are disregarded in today’s Cuba — and perhaps in tomorrow’s, too, once Raúl Castro has imposed a kind of State capitalism which no Cuban ever voted for.

During those brief, but intense encounters, the focus was on mutual respect, the process of building bridges through dialogue (something that the Cuban State would never tolerate), and on a future of understanding, rather than dwelling on a past of irreconcilable mistrust. Freedom is not a luxury of the First World. As the dissident leader Oswaldo Payá said: “Without hate but also without fear in our hearts, Cubans are ready for freedom and we are ready now.”

During our tour, we shared with a community of Cubans in several cities, who until then knew us only through the internet: virtual friends who for years have been actively collaborating with our independent projects inside the island. These projects include the digital magazine VOCES, the photo documentary contest PAÍS DE PÍXELES, and the filmed debates of RAZONES CIUDADANAS.

Civic society in Cuba is a fragile emerging phenomenon that has gained global attention despite the limited access to internet and repression in Cuba. As a reader, you can shed light upon the real Cuba that tourists and enterprises are willing to ignore. You can help our people to peacefully achieve a more inclusive nation. You can help us reach the future that all human beings deserve, regardless of ideology.