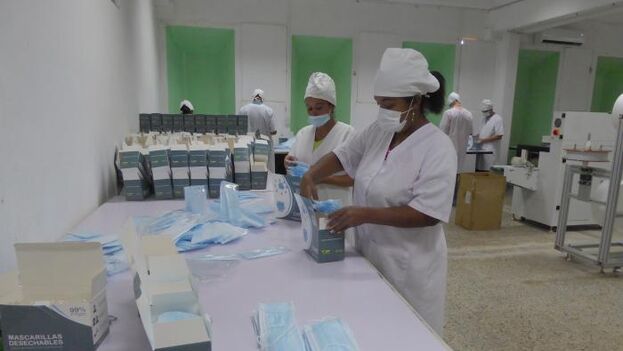 14ymedio, Madrid, December 22, 2022 — The azulitas [little blue masks] are piled up in the Gardis warehouses. The plant, located in Matanzas, Cuba, already has  accumulated 300,000 units, and, although there is enough raw material to make half a million more, its fate seems doomed to the point that “there are those who question the purpose of keeping this factory active,” the State newspaper Granma says.

The company Unimoda, belonging to the Gardis group, began to produce national masks after a huge and catastrophic chain of hardships. The process was so delayed that, when the azulitas arrived at the stores, the pandemic was already on its way out and now its only option seems to be its incorporation into the Health system, a position currently occupied by the state Medical Supply Company (Emsume), which imports them, mainly from China.

Omar Tápanes Hernández, general director of the business group, explains to the official press that, if the country considers its contribution necessary, masks will continue to be manufactured, although it appears from his statements that for this it will need to ensure raw materials in a stable way.

Fulfilling this condition “would make it possible to meet the needs of the health system for a long time and even export about three million masks to countries in the area every month,” the text reads. “We have the equipment and the young and already qualified workforce,” says the official.

Tápanes Hernández maintains that “the resources generated” have managed to cover the investment, but the managers have never shown signs of a significant sale of masks, and the quantities accumulated in the warehouses or the excess of raw material — all a novelty on the Island — seem to support the failure of the masks.

During the outbreak of the pandemic in 2020, and in the midst of a global fight to get hold of the coveted masks, Cuba announced with great fanfare that “for the first time” it would manufacture its own “disposable, hygienic and surgical” masks. The process, they said then, would allow the country significant savings in imports. “Cuba imports them at an average of 46 cents; it would cost only six cents to make them at home,” said the then-director of Gardis, Diosdado Abreu Falcón.

Thus, Lway Aboradan, a Syrian resident in Cuba since 1994, won the contract tender. His proposal came as soon as the pandemic broke out in the West, in March 2020 and, although his intention was to partner with the Government, the bureaucracy led him to make the decision to be only a supplier of machinery and raw materials. In addition, although his disbursement was in foreign currency, he had to initially agree to collect — little by little and depending on the sales — in Cuban Convertible pesos (CUC) and, after the Ordering Task*, which abolished the CUC, in Cuban pesos.

In October 2021, he complained of not having seen a centavo yet and unraveled a whole series of annoyances, among which were the mishandling of the machinery and the problems training employees by videoconference, which infinitely delayed the start-up process. At that point, shortly after beginning production, they already had 250,000 surgical masks gathering dust, because not a single one had left the premises.

Months later, in April — the mandatory use of masks was eliminated on the Island on May 31, with the exception of health services — Unimoda exposed the extraordinary situation of low demand, motivated mainly because its main recipient, the Public Health system, already had its needs covered by Emsume, which by that time already had a normal availability.

Emsume is the marketer of medical materials, integrated into the Medisol state group and, according to its own data, imports 95% of its products, most of them from China. The national cost, finally, was not the main expected advantage since, according to Unimoda, the ones that Emsume delivered were also cheaper.

Thus, the sale was restricted almost exclusively for tourism, to other organizations and online sales. The company alleged that the marketing had to be in freely convertible currency (MLC) to support the import of raw materials, and its price ranged between 10 and 12 cents. Although it did not specify whether the cost was for sale or manufacture, it was already almost the double announced by Abreu Falcón. “In total, we have about twenty customers, including distribution to the population in national currency,” said Maribel Rodríguez Argüelles, director of Unimoda.

Granma wondered why masks of lower quality than those of Unimoda were still seen on the street, although a reader blurted out with clairvoyance: “The demand of the population was met by private sellers. Action was delayed, as well as the newspaper article, after so many months.”

This Thursday’s article in the official press, dedicated to noting that there are still cases of COVID-19 and there is no need to lower our guard, states, however, that the company contributed “to the confrontation with the SARS-COV-2 coronavirus in the province.” The explanation makes something clear: that the brand new masks made in Cuba have barely left Matanzas.

*Translator’s note: Tarea ordenamiento = the [so-called] ‘Ordering Task’ is a collection of measures that include eliminating the Cuban Convertible Peso (CUC), thus leaving the Cuban peso as the only national currency, raising prices, raising salaries (but not as much as prices), opening stores that take payment only in hard currency which must be in the form of specially issued pre-paid debit cards, and a broad range of other measures targeted to different elements of the Cuban economy.