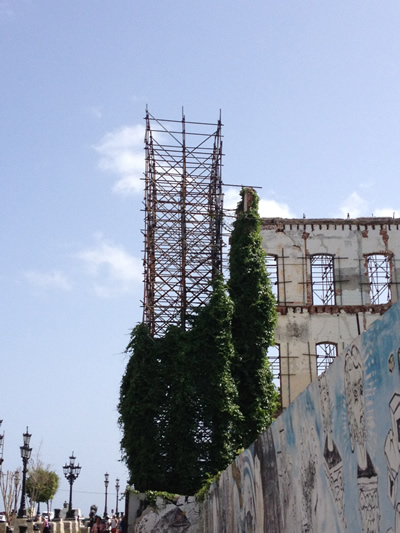 She has broken a nail in her agitation. Tomorrow she will have to go back to the manicurist to restore the nail polish and the miniature English flag painted there. His shirt is falling apart in the effort and his whole body is covered in sweat as if someone had thrown a bucket of water over him. No, it’s not an erotic scene, it’s not love, but lawlessness. A couple under the June sun carrying sand to finish remodeling their kitchen. They’ve stolen it from a theater that is being remodeled. Lurking until the custodian fell asleep after lunch. Then they filled two bags, which are enough to build a little counter. The little house has been built this way, taking a bit from here and there, hoping for someone to look the other way to carry off some bricks or floor tiles. Their little home has been the result of depredation, of this rapacity that so many Cubans assume towards the resources of the State. Take everything you can, grab anything from this powerful owner… and get it done.

Among the reasons some buildings take so long to build or repair are not only apathy and lack of efficiency. The theft of cement, steel and other construction materials also slows down many public works. Some are already memorable, where the amount of resources stolen increases the initial costs of the building or restoration by a factor of three. The sinks disappear even before they come off the truck, the paint cans are filled with water to resell the paint on the black market, and there is even a hotel where 36 air conditioners were stolen a few days before its opening. Faced with so many thefts, each object and resource must be closely watched and the watchers watched in turn.

Many eyes are waiting for a slip-up. In one uncontrolled early morning a mound of gravel was reduced by a third. On some summer vacations, a school without a custodian could lose several windows and the occasional toilet. The light fixtures disappear, the electrical switches are ripped out and the looting extends also to the door handles, the stair railings, and even the ceiling tiles. With no pangs of conscience or guilt complexes on the part of the perpetrators. It’s more like the exploited poor taking a piece of the boss’s delicious snack when he’s distracted looking out the window. It is symptomatic that almost all those who take building materials from State construction projects feel no remorse for doing so. They call it “recovering,” “inventing,” “struggling,” “surviving,” When standing in a shower built with stolen tiles, under the running water they think, “you take what they give you and what they don’t give you… too.”