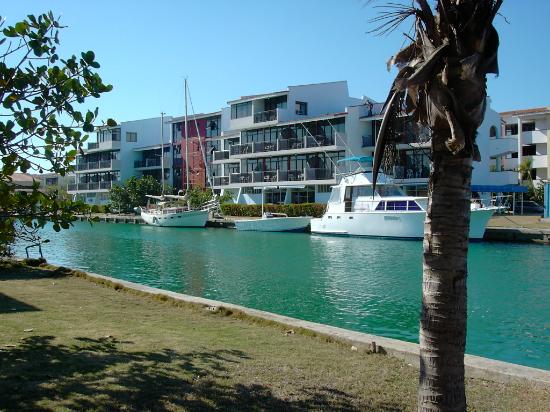 Yamil, a Cuban man who emigrated in 2000 to the United States and who has been a U.S. citizen since 2003, is serving a sentence of 10 years in a maximum security prison in Cuba, the Combinado del Este, accused of “human trafficking.”

But the case is contaminated. I will tell you his story. On October 12, 2007, with a tourist map, Yamil left from a marina in Florida to go to Cancún, México, in a 26-foot boat, a Róbalo fast boat, with two outboard motors and a GPS system.

According to Yamil’s story, “I was thinking of spending a couple of days in Cancún and then taking a boat to Havana.” Bad weather obliged him to change his course toward the Hemingway Marina, a center of free access for international tourist boats on the outskirts of Havana.

Then began the witch hunt of the Cuban authorities, pressuring him and his family to admit he came for the purpose of human trafficking.

From the time he arrived in the United States in 2000, Yamil had visited the island seven times. To see his mother and other relatives, and because he had begun a sentimental relationship with Marleny González, a neighbor in his family’s building, in the district of Miramar.

He had plans to marry her. Since 2004 he had asked for a visa so his fiancée could leave for Miami. But by the time the United States Consulate in Havana gave him a satisfactory response on October 27, 2009, he was already a prisoner.

So the question floats in the air: “Why would Yamil Domínguez need to leave Cuba illegally, and run the risk of being caught?

Yamil isn’t immaculate. “Several times I thought about getting my fiancée and family members out secretly, but I always gave it up, not wanting to risk my security and theirs.”

As far as I know, no civilized law can condemn someone for thinking about a supposed crime. Yamil is a classic story of a Cuban who triumphed in the United States. On this island he never was part of the opposition. He formed part of that anonymous tide of people who attended, purely by compromise, the government marches or the neighborhood meetings.

His family was what is known in Cuba as “integrated,” or rather, revolutionary. Politically correct. In his fatherland he worked in tourism and rented out his car illegally to gain a fistful of pesos that would make his life more bearable. The same as thousands of Cubans, he lived on the border of legality.

But Yamil wanted something else. A society where to prosper and have ambition wasn’t seen as a crime. And thus he left. In a legal and orderly way, after having won the lottery. In the month of Christmas, he arrived in Miami, with an extravagance of lights and consumption that surprised him.

He started as an apprentice bricklayer, and thanks to the level of education he received in Cuba, a path was opened to him. In 2007, Yamil became a licensed contractor. He generated a business worth several million dollars, and this same year he hoped to earn an annual salary of one million dollars.

Life for Yamil was beautiful. He came to Cuba every time love and homesickness touched his heart. That was his weakness. Nostalgia. That feeling that after time becomes a thief that robs us of our strength. He commuted between Havana and Miami. His unlucky day was October 13.

“Every day I ask myself if what happened is just a nightmare. I spent two months in a cell of two square meters that was 105 degrees Fahrenheit in Villa Marista (seat of the political police). I was sentenced to 10 years, in hard prison conditions, where they applied different types of humiliation and torture to me. I saw my family every 45 days. At times when I wake up, I open my eyes slowly, thinking that I’m going to find myself in my home in Florida,” Yamil recounts with a sad voice on one of his family visiting days in prison.

His life changed into a Calvary. For non-payment, the bank foreclosed on his house in Florida. He lost his business. And lawyers fees came to more than five thousand dollars. It happens that by Cuban law, when it comes time to pay, Yamil is a North American citizen.

According to the Constitution of the Republic, Cuban citizenship is lost when you gain citizenship in another country. And the government of the United States, which is capable of unleashing a war on behalf of any United States citizen, in the case of many Cuban Americans, has a very weak position. Yamil Domínguez is in no man’s land.

According to a law firm of independent lawyers that Wilfredo Vallín directs, who have studied in detail the transcript of the case brought against Yamil Domínguez by the prosecutor, there’s a procedural error in the instructions in the case.

As is usual in the islands’ legal system, the accused are guilty from the start and must demonstrate their innocence in the course of the investigation.

In addition, for these independent lawyers, the type of crime is badly applied. “The only thing that can apply is illegal entry into the country. The penalty is two years, and they can’t confiscate your boat,” explains Laritza Diversent, one of the attorneys.

According to Yamil, the trial was a circus. He refused to sign any document that incriminated him, and he does not accept the confiscation of his boat.

An ex-functionary of the Ministry of the Interior, analyzing his case, says, “It could appear subjective, but the key to all this is the boat. Many bigwigs and generals lean over backwards for good boats. If you find out where the boat actually is, you will have your answer. It’s easier to sentence you to 10 years for human trafficking, and you can confiscate the boat, than to give a sentence of two years for illegal entry, a punishment where, after you get out of prison, you can ask for your boat back.”

The United States Consul in Cuba visits him every three months, and Yamil is not satisfied with his treatment. “To save medication they open the pills for me and leave me only a daily dosage. They allege that they don’t want to have a diplomatic conflict because of the Cuban Americans who are prisoners on the island,” Domínguez said.

And they do little. Or nothing. Meanwhile, Yamil does not remain with his arms crossed. He has opened a personal blog, Notorious Injustice, which is updated by his wife and his sister. He writes not only about his drama but also about life in prison, politics, or Orlando Zapata.

After two-and-a-half-years in prison, Yamil Domínguez is convinced that his only crime is having been born in Cuba and having chosen the option of emigrating. He believes that he’s paying for that. No more.

Note: Since April 14, Yamil decided to stop eating food and to take only liquids, so that his case will stop being a notorious injustice.