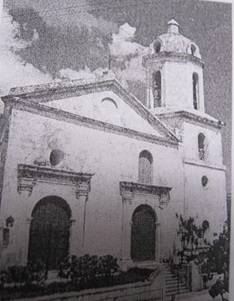 Giral street, in the El Moro development in the Mantilla district, was the only asphalt street, extending from Calzada de Managua to Avenida de Dolores in Lawton. In its first stretches, it crossed the dirt roads outlining the development area, then continued between the different ranches, so abundant in the area, that supply fresh milk to the nearby Lucero Creamery and provide meat to the slaughterhouse. Electrical lines and the aqueduct end and give way to oil lamps, kerosene lamps, and artesian wells. Nights that were previously full of shadows have become luminous. 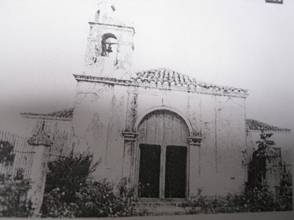 On this street two blocks from the Calzada, one finds a small church constructed in wooden mortise and tenon, with a gabled roof of French tilesand a large front patio-garden crossed by a concrete sidewalk leading from the street to the church doors. It was here where we children from the district attended catechism dressed in our best clothes each Saturday afternoon. When it was over, the priest, a young, happy man, hosted a children’s party with sweets, candies, chocolates, cookies, and drinks that lasted until about six in the afternoon. This was the hook to attract us and ensure we abandon our games and pranks. However strange it may seem, we only went to this church on Saturdays. 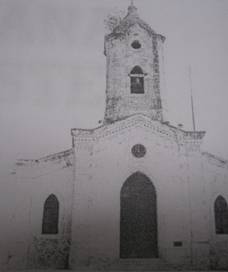 Mass on Sundays was destined for the stone church, larger and brighter, which was found – and I think it can still be found – on the Calzada, in front of the old Route 4 bus stop. Perhaps because it was more distant and outside the district, it represented an outing that continued with a snack in the bus stop cafeteria and ended by dropping in on friends that lived in the area. Sunday mornings were practically dedicated to these occupations and Sunday afternoons were reserved for the cinema or going to some fun park or circus, depending on the season when they were set up on some development land or close by.

On the corner by my house,a Baptist church was constructedat the end of the 40’s (it had a large nave with high brick walls and a gabled zinc roofwith many large windows) but we never went there: most of our neighbors were Catholic, even if they did not really practice; others were spiritualists, but with Catholic roots as well.

On their respective feast days, processions left from both Catholic churches, accompanied by most people, adults as well as children, intoning religious canticles. Some quarreled over the honor of being able to carry the images on their shoulders, much as they did over carrying the lit candles and banners. The apotheosis occurred on the day of Caridad de El Cobre: it constituted the greatest, most well-attended and eye-catching procession. It ran through practically all the main streets in the neighborhood before returning to the church. Holy Week and Christmas were also important, full of different activities, from handing out the palm fronds, blessed in the first week, up to the beautiful nativities in the second.

These were the churches I remember from the Mantilla district, and around them, among laughs and games, some fights and first loves, the first approaches to Catholicism were developed outside the family house.