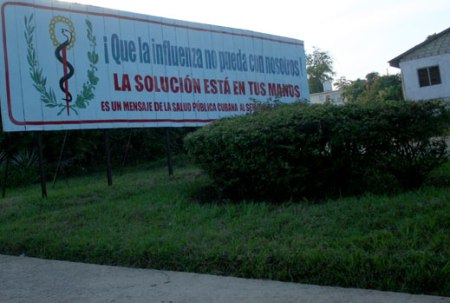 May the influenza not win over us!
THE SOLUTION IS IN YOUR HANDS
A message from the Cuban Public Health at the service…
Photo: Orlando Luis

When I was young, there was a very popular children’s song that made reference to a sick donkey whose ills always had a solution. “My donkey, my donkey, has a headache: A doctor sends him a black cap…” we children sang in chorus, and the little tune went on, letting out in its stanzas each discomfort of the quadruped, until he would end up completely cured. I never thought I’d see the day when I would, sincerely and categorically, envy that donkey because, in spite of the difficult conditions that the Cuban reality imposes for our survival, everything is more or less “tolerable” until you find yourself forced to see a doctor. It is there that the true agony starts.

Recently, my mother had to go to the clinic (family doctor) because of her persistent discomfort in the throat. There, after waiting for her de rigueur turn, a physician as ancient as she, or older, prescribed an exudation –to be performed at the Emergency Hospital- to test for possible bacteria. As a precaution, the doctor prescribed Tetracycline tablets to her “to be taken after the exudation.” It is clear that the doctor knows the reality of the Cuban health system. The exudation could not be done because “there is no technician” at the hospital’s laboratory, nor do they know when there will be one, “go see if they want to perform it at the Hospital Calixto Garcia.” They did not want to, or they were not able to. Resigned, and without a diagnosis, my mother completed her “treatment” by taking her antibiotics: she was sick to her stomach and for several days, she still presented with discomfort in the throat. (My donkey, my donkey, has a sore throat; the doctor has put on him a white tie.)

But hers is just a minor case. When you go to a doctor’s office here, you discover horrifying cases. A lady I personally know went to a certain hospital with numbness in one arm and general malaise, including a headache, and, just like that, she was diagnosed with a stroke. Very alarmed, her family then went to another hospital, this time through a doctor friend of theirs, who was a friend of another doctor who had clout, etc. It was only then that, after rigorous tests, they arrived at the correct diagnosis: the old woman was incubating a virus, her immune system was compromised and –besides that- was rejecting the antihistamines she had been prescribed to treat her allergies, hence the numbness of the limbs. She improved within a few days.

I recently heard of an extreme case about a man, also very old, in the terminal phase of lung cancer who was not being given oxygen “as to not to create dependency.” He died within a few days, which was inevitable, only that he was in terrible agony. I’m not allowed to cite this source either, but it is a real life case from my own municipality (Centro Habana). This very humble old man and his family didn’t have any “godfather” to go to. I could write whole pages with enough examples of this sort to crash this website.

I know that many readers might also give examples of irresponsibility, poor attention, lack of resources and missed diagnoses that take place everywhere in the world, but here, they are becoming commonplace, and we don’t have the opportunity to make the slightest claim or to opt for “another service” because of the “egalitarian” and centralized character of the system. The truth is that, in Cuba, one can no longer be assured of receiving good medical care -except for few and honorable exceptions- if not with the corresponding “recommendation.” Almost always, if one sees a doctor through established channels, the doctors’ hands are tied and they cannot perform tests that are required for an exact diagnosis; in other instances they are able to diagnose, but it is possible that the medication needed is not found at the drug stores, or it is dispensed only in CUC, at prohibitive prices for the commonplace Cuban pocket. Because of so much confusion, many prefer not to see a doctor uselessly and try to “make do” with concoctions of traditional medicine and with prayers that aren’t always sufficiently effective, as may be understood. Such are our very expensive freebies.

In today’s Cuba, the total deterioration of the system rages most scandalously in hospitals, polyclinics, clinics and pharmacies. Added to the already inadequate resources -always attributed to the ubiquitous “embargo”- and the eternal lack of medications in national currency pharmacies, is the shortage of medical personnel or the questionable ability of some of those not yet “in mission” or “collaborators” (which is not the same) in some Venezuelan neighborhood, in any remote jungle, or in a lost valley in the Andes. The TV news and the official press abound with examples of the medical miracles Cubans manage through other lands. Apparently, when it comes to Cubans, any place is good to practice medicine and to find solutions to illness… Any place, except Cuba. (My donkey, my donkey, nothing ails my donkey. The doctor prescribes apple syrup. You don’t say! Apple?! Ha, ha!)