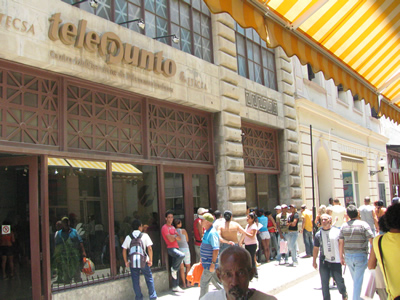 My cellphone rings but I don’t answer. I wait for the ringing to stop and go to a nearby phone to call the number shown on the screen. I’ve warned my friends that I’ll let a call go and call them back later, but some insist, forgetting about the high cost of a minute of conversation on the cell network. I have a code with them: two rings if it’s urgent and three if it’s about something that can wait. When I’m in the street and the device I carry in my purse vibrates, I look for a public phone that takes coins and doesn’t have the handset ripped off.

Although the telecommunications company ETESCA reported that the number of cell phone users will soon surpass one million, we remain handicapped with regards to this technology. To receive a domestic call is madness, configuring the texting can take hours of fighting with the operators, and finding a place that sells recharge cards is like the movie Mission Impossible. Like a teenager whose growing feet no longer fit in his shoes, our cellphone system has increased the number of subscribers but without the corresponding improvement in infrastructure. Well, the growth doesn’t follow an integrated development of the system, but is led by the desire to collect — at all costs — those colored convertible notes that simulate the dollar.

Despite recent reductions in the high rates, even a doctor can’t afford cellphone service, but the political police enjoy subsidized rates which they can pay in national currency. Nor is it possible to open an account and pay at the end of the month, we have to pay in advance to be able to communicate. Many of us feel defrauded by ETESCA, but the State monopoly doesn’t allow other competitors to offer us better and cheaper service. Meanwhile a solution appears, thousands of users work out a strange Morse code with cellphones: One ring, two, three… Don’t answer on the other end! Just run to the nearest phone.