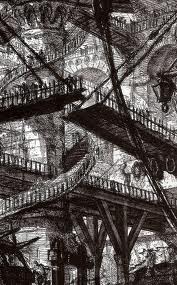 Piranesi etching of an imagined prison.

Lately the mass media talks a lot about “the Human Rights we defend.” The topic is no longer taboo, with limited coverage of health, education and social security. Very few Cubans know the Universal Declaration of Human Rights, despite that fact that putting it in a tabloid would cost a peso, but no one has dared to publish it. University students don’t know what it’s all about, the whole body of it seems like a venereal disease that no one dares to mention.

For the first time I am aware that to honor the date on which the Universal Declaration of Human Rights was enacted can be risky. The visit from “the comrades” and “the factors” last week opened a parenthesis of threats that can range from instilling fear to physical action. I do not know what will happen tomorrow and I would like that nothing happens, but any action against peaceful people who want a thriving and diverse country, would confirm the need to expose once again a government that says it champions the Human Rights “it defends” while ignoring those it disrespects.

In the imaginations of much of the world, Cuba remains an alternative where altruistic citizens build the social project of the future. Cubans in reaction, for so many years, have constructed a Piranesian project. We are suspicious and it has brought out the worse in us, stirring up rich vs. poor, homosexuals vs. heterosexuals, religious vs. atheists, exiles vs. those on the island.

It would seem these differences are surmountable, but since the government continues to instigate the “good citizens” against the dissidents, and meanwhile the dissidence and different concepts of freedom are criminalized, it remains an unfinished task.

Because it has the means, the government can ban meetings and even imprison activists. But new faces will continue to appear, because the objective conditions exist and in the sleep society there is a secret will for change. A quick look at those who enter the visa lottery, to go to the United States, those who have abandoned and continue to abandon the national territory in all directions — including those who have lost their lives in the attempt — the women who put off giving birth and the couples who barely conceive one child; those who vote blank ballots or annul their ballots or don’t vote at all, those who daily steal from the State by action of omission. People without confidence in the successive promises. It is an enormous subjective figure. Subjective, but as weighty as a plebiscite.

State Security possess all the information about the internal situation, how it’s analyzed and what patterns it shows remain to be seen. Tomorrow we will have a preview.