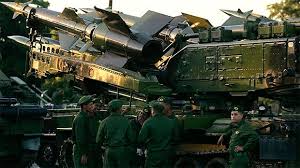 HAVANA, Cuba, December, www.cubanet.org — The Bastion 2013 Strategic Exercises recently concluded with the so-called National Days of Defense. Headlines such as “The Heart of the Country Is Invulnerable,” “The Enemy Will Have No Peace,” “An Unbreakable Coastline” and others equally ridiculous could be read in the November 25 edition of the weekly Trabajadores.

They have once again taken the military paraphernalia out of storage to inflict an imaginary defeat on the enemy, which occasionally lands in the country with its phantom divisions.

As well as being something outside the bounds of common sense, fabricating external aggression at this point is increasingly useless. There have been so many combat preparations and invasion warnings that have proved pointless that almost no Cuban believes in the demagoguery that sustains them anymore.

Indifference and mockery are the routine reactions to these expenditures of human and material resources, which are not even successful at diverting attention from the serious social and economic problems that affect a wide segment of the population.

“They are shameless. Instead of investing money in important things, they waste it knowing full well that we will never see American troops in Cuba. It is a cliche they use for the sake of convenience. Essentially, it stems from a need to present an image of unity and strength. They know that the probability of a military confrontation between the two countries is very low, practically impossible,” says a former military official.

Very few citizens spend time on this sort of news. The most widely read items in the official press continue to be the television schedule and the sports page.

“I don’t waste my time on this nonsense. We have had enough of this war for subsistence. If the Americans ever come, I would be happy if they brought food and other stuff. With that they would win two out of three. The country is already in ruins, even without a missile having been fired from overseas,” says a retiree living in the capital.

After a series of virtual military battles throughout the country, Cubans are still confronting challenges brought on by difficult circumstances. Dealing with the bureaucracy, finding their way through the maze of the black market and struggling with high prices for essential consumer goods are some of their primary concerns. According to the vox popoli, however, efforts to keep us mired in poverty will be even more intense in 2014.

There is no shortage of reasons for such assumptions. The just completed Bastion 2013 is a bagatelle, a children’s game compared to the battles we have to face every day in the farmers’ market, with their heart-rending prices, or in the hard-currency stores, which are fully capable of destroying anyone’s patience.