14ymedio, Juan Diego Rodríguez, Havana, 23 September 2022 — In its desperate struggle for the yes to win in the referendum on the Family Code this Sunday, the Cuban Government has mobilized not only workplaces but also schools.

Barely thirty kids, from nearby schools, arrived this Friday at the corner of G and Malecón, in El Vedado, Havana, where a march was called for 3 pm that would be enlivened, as they pompously announced, with “dancing and congas.”

Dragging their feet, accompanied by teachers who walked with the same reluctant step, they received a cap and fans, all made of cardboard, with the colors of the rainbow and the slogan “Code Yes” from the hands of officials stationed in front of a car of the Union of Young Communists (UJC).

Some of them, after receiving these, didn’t hesitate to flee the place. “We’re going to stop by — there’s a camera — so they know we were there,” a teacher told a group of teenagers while they deserted the activity before it even started.

Another group followed in the footsteps of a UJC official who harangued them with a whistle, to walk to the next point of call, La Piragua. This esplanade, located on the Malecón at the heights of the National Hotel, has recently moved to the Anti-imperialist Tribune, in front of the United States Embassy and a few feet from there, as the center of propaganda events organized by the Communist Party of Cuba.

In the evening, a concert will take place, the official press explained. Los Van Van, Haila María Mompié, Arnaldo and his Talisman, the La Colmenita Children’s Theater Company and actors of the Teleseries Calendario will participate.

Around 3:30, La Piragua was observed guarded by a huge police operation, with parked patrols and agents stationed on every corner. Immediately several buses arrived with more students, all dressed in their uniforms.

As part of the event, the authorities established stalls for the sale of handicrafts and food. The prices were high: for example, bread with pork, at 250 pesos, and bread with ham, at 200. To drink, they offered Coca-Cola and Mahou brand beer, something striking if one of the propaganda posters that “decorated” the stalls is taken into account: “Against Spanish Colonialism.”

“In no way is this a voluntary event. It’s a forced concentration of students where they are taking advantage to sell food, drinks and handicrafts at unpayable prices,” lamented a passerby who stopped for a moment hoping to buy something to eat.

Around 4:30, many among the crowd of young people began to scurry away, little by little, under a harsh sun and in the face of the impossibility of spending so much on a drink.

The schools in the capital have been wallpapered with posters containing the slogan “Code Yes,” and students have already been warned of the obligation to “take care of the ballot boxes” [i.e. observe the voting in person] on Sunday, “for at least four hours,” according to a high school student from Nuevo Vedado. 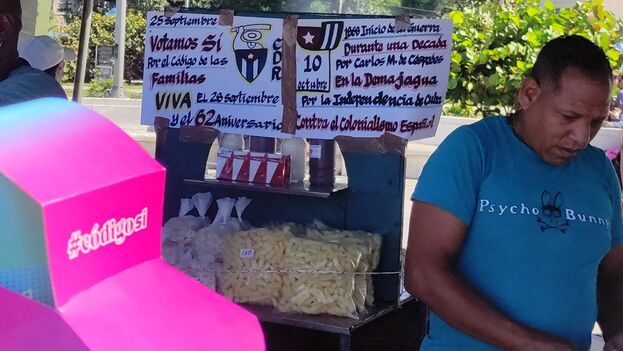 To drink, they offered Coca-Cola and Mahou brand beer, something striking if you take into account one of the propaganda posters that “decorated” the stalls reads: “against Spanish colonialism.” (14ymedio)Translated by Regina Anavy