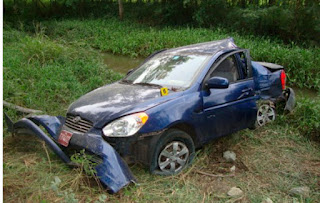 What would have happened if Oswaldo Payá was carrying a legal gun at the time of the tragedy of his death so often predicted by the Cuban government?

If the right to obtain a license for the civilian use of weapons (a right abolished, like so many, after the legislative catastrophe of 1959), the political police, for example, would not be able to act with the impunity of thugs who will take over any street, whether on foot or on their Suzuki motorbikes, or in a car.

The mafia of the Revolutionary materialism would know then that, before such assaults where they don’t even identify themselves, they could end up with a bullet in their forehead and without recourse, because legitimate self-defense in a universal value that survives even here.

The disrespect with which the Cuban repressors treat the bodies of their victims would end. Not one more express kidnapping. Not one more constraint. Not one more public threat. Not one more act of repudiation. The right to defend ourselves with arms, as citizens, would heal all the humiliating rot that has denigrated thousands and thousands of Cubans in the last decades.

If you are not vested with authority, and with the proper documentation issued by the relevant authorities, don’t approach me with your pow-pow because I’ll give you bang-bang! fully exercising my legal faculties.

Peaceful coexistence passes first through such empowerment, through the responsibility of good men who don’t deserve to be treated like criminals by a despotic police force manipulated by the politicians.

Perhaps the delayed democratic transition to a future Cuba would begin to conserve its pro-democracy men and women, to stop this silent drop-by-drop holocaust.

They could stop demanding so many abstract rights and focus on one concrete demand, that would have the support of the overwhelming majority of people, beyond political colors, above all not that they are beginning to create interest in the private economy and the crooks are already jeopardizing the security of their owners (the criminals, like the police, always get weapons: why not then their defenseless citizen victims?).

Please, could someone postulate something quick to preside over a hypothetical People’s Bang-Bang Party? The program would have only one point, but a tremendous biological aim:

1) WE DO NOT WANT TO LET OURSELVES BE KILLED.