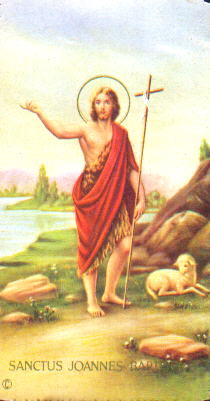 According to custom immemorial the Church has highlighted the personality John the Baptist in the life of Jesus, to these ends it marked his celebration on June 24th, for being the precursor of the Messiah and he who baptized Him at the shores of the river Jordan, the condemnation against Herod Antipas Tetrarch of Galilee for marrying Herodias, wife of his half-brother, provoked the ire of Herodes and he was incarcerated (Luke 3, 1-20), and later was decapitated by request of Salome, daughter of Herod and Herodias (Matthew 14, 3-11).

Saint John the Baptist appears represented in the religious imagery dressed in a lamb skin, carrying a staff and a parchment with the words Ecce Agnus Dei “This is the Lamb of God”.

Many are the traditions, I recall my great-grandparents and my grandparents would save old junk pieces that would break during the year and on that day they would make a bonfire in the yard and would burn them, whilst someone in the family would recite or pray El Pregon del Bautista (Proclamation of the Baptist), as a sign of a new beginning; this day also marks for others, the beginning of bathing in the beach, alluding to the fact that the jellyfish retire from the Caribbean, since they provoke skin irritations in bathers.

Many Catholic Christians, practicing and confessing, and the populace itself, don’t know that the 24th of June is the Day of the Godparents, a feast established by His Holiness Pius XII, who in the founding ceremony said: “Make certain that the godmother and the godfather be fervent Catholics so they be completely conscious of the duties they acquire of perpetually having entrusted (the spiritual child) the Godchild, and to care diligently for however much refers to the formation of the Christian faith, so that this be demonstrated throughout all their existence just as they promised in the solemn ceremony that should have been endeavoring also their religious education”.

This feast, aside from promoting the sacraments of Baptism and Confirmation, is created in order to seek in society the respect, the personality and the veneration toward the godparents, who through these Sacraments can fulfill the functions of Father and Mother in absence of one’s own and tries to tighten the bonds of union between families each day more through the spiritual kinship between Godparents and Godchildren.

The symbol of this feast is the White Dove, having descended the Holy Spirit in this form over the head of Christ in the moment He was baptized by John in the river Jordan.

Let us have on this date a remembrance for our Godfathers and Godmothers who through the sacrament of Baptism and Confirmation assumed the responsibility of being our second parents before God.