We believe every human being in the world has the right to health, with no consideration of costs. 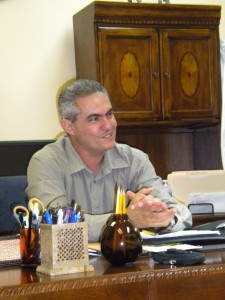 Juan Juan: Solidarity Without Frontiers is a relatively young organization with very defined purposes. Somewhere I read, “Our membership is composed of doctors who have fled the Cuban communist government, and today live in the United States and other countries.” With such an explicit declaration, someone might wonder if Solidarity Without Frontiers is a politically based organization where health and ideology come together.

Juan Cesar Alfonso: Solidarity Without Frontiers is not only Cuban doctors; we also have doctors from other countries. It was founded in Miami in January 2004, to be a humanitarian organization. An non-profit organization like ours cannot engage in political activities. The Cuban regime brings the politics. Many of our members are doctors who have deserted from Cuban missions in third countries, making them “traitors to the Revolution,” and of course, denying them entry to Cuba. We help those who come to the United States and help them to create their own future.

In September of 2006 we achieved a law offering visas to all the Cuban medical personnel who desert in third countries. Many people worked on this; we put in our grain of sand.

JJ: Forgive me for interrupting, you use the word “desert” and you are not military…

JCA: That’s true, thank you for the clarification; the doctors did not desert, they are refugees who decided to live in freedom, abandoning their missions which, from the Cuban side, they are not allowed to leave. They are forced to flee that way, or illegally.

When a Cuban doctor decides to leave the country, the government will delay him for five or ten or more years; later they won’t let them return. I know a boy whom the Minister of Health freed after his visa had expired. Now he has no work and he can’t travel.

JJ: And in those cases you take some action?

JCA: We do what we can, we talk with Washington or with whomever can help. Sadly, the Cuban government has the last word about allowing or recognizing any kind of intervention. It’s a form of punishment. So it happens all the time. We make known our interest in sending donations; but the Cuban government won’t allow it We have helped in indirect ways, regardless of who governs the country, Solidarity Without Frontiers is a commitment to the Cuban people.

In his work, a doctor has to be apolitical, he serves others, like a priest. A doctors consultation is a sanctuary. As it says in the Hippocratic oath.

JJ: Many swear to the oath, few uphold it.

JCA: That’s true. But what is right is that once you cross the threshold of your office, you are no longer a soldier or a politician, but a human being and you should be serving others. It’s an inviolable principle for those who believe in their profession.

JJ: You, Julio Cesar Alfonso, are one of the founders of Solidarity Without Frontiers; tell me a little about your life.

JCA: I was born on June 6, 1968, in Cárdena, Matanzas. I grew up there, studied there until my pre-university schooling in Jagüey. Gathering oranges and supporting la santanilla. Man, those ants bite.

I decided to study medicine in Havana, at the Giron Faculty of Medical Sciences, then went to the Carlos J. Finlay Hospital and CIMEQ (Center for Medical-Surgical Research). Back in college we had a group we call the June 14 Youth Movement, a name which camouflaged our intentions as that day marks the birth of Che Guevara, and also that of Antonio Maceo. It was a group that was characterized by frequent and sharp criticism of the Young Communist Union Federation of University Students and was a good experience. We had a meeting where they forced us to dissolve the organization. My problems started from that and my discontent grew.

In 1993, we went out as a group to write counterrevolutionary slogans in the street and someone snitched on us and the next day I was arrested. I was in prison for seven or eight months, in Matanzas State Security where you never knew whether it was day or night. They released me, they couldn’t prove much. I was thrown out of work and had to put to invent things to make and sell crafts in Varadero. Every time something happened, they came looking for me and took me prisoner. I did not want to leave Cuba, I had no choice. I applied for refugee status from the United States, and was accepted. … Here’s the funny thing, if you remember a little while ago I said that I founded the June 14 Youth Movement? Well, the first of my two daughters was born here, on June 14. My two creations, amazing coincidence, Papa God has a good sense of humor. 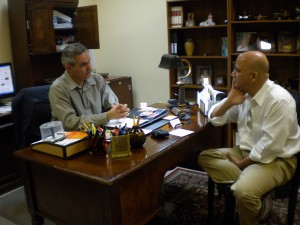 JJ: … tell me now about your parents.

JCA: My father is a mechanical engineer living in Cuba. My mother is a dentist… she was. Recently she went to Venezuela as an internationalist doctor, and we got in contact by telephone, and then for some strange reason she suddenly took ill and had to return to Cuba where she was admitted to the Naval Hospital in Havana… and she died. It’s one of the hardest things that has happened to me, I still can’t get used to it. So I say she is, not she was.
I couldn’t go to Cuba, I didn’t even try to ask permission to see if they would let me because they would have refused it.

JJ: You could not attend her funeral…

JCA: it’s one of the ways that one pays for exile.

JJ: You could be right, I don’t like the word exile, it feels excluding. I thank you for the interview and want to offer my admiration of your very commendable work.

JCA: Thank you, and come back whenever you like.