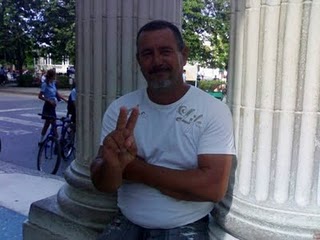 For Mother’s Day the Cuban government gives exactly what can cause the most pain: the loss of a child. And the Great Mother, the Nation, is mourning another of its sons who, like the long-ago freedom fighters, the Mambises, decided to die rather than be abused, expelled from his own land, a park, Vidal Park, where he took his first steps in life and from where some thugs tried to evict him.

Juan Wilfredo Soto was a man of principles. From his youth he presented his ideas against the “revolutionary process” and, therefore, at age 17, was expelled from school and imprisoned, for which he was known as the “Student.” Then followed other convictions for the same alleged “crimes”, rights that the Constitution of the United Nations itself recognizes as inalienable for all human, but which the Cuban government considers violations of its “iron fist” policy.

One day we will also have a “Wailing Wall” and there we will carve the names of those who have been dying in silence for over fifty years, without an electronic medium that could deliver the news and break the jaw of censorship, reaching the new era thanks to satellites, where they cannot stop the names of Orlando Zapata and Juan Wilfredo Soto escaping, men who will be together because they chose to take the path of freedom and become the pride of their countrymen.

As always, the Cuban press keeps silence or publishes the official version, drafted by the leaders of the State. Wasting words justifying a cruel murder, without offering more space in their newspapers than they allot to the whining of bin Laden, the “prodigal son” of Fidel Castro.

Perhaps this is the revenge of an eye for an eye. The Americans took away the most hated terrorist and the Cuban government, in response, bludgeoned to death a righteous man, although at the time he was defending merely the principle of being able to walk in the park in his city.

We have just buried John Wilfredo Soto, who is now a star blazing in the firmament, watching us.