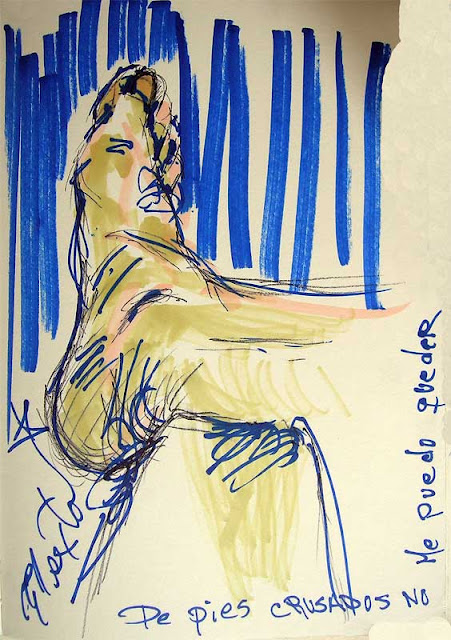 I’m so crazy I think I can be a writer.
Or at least play at being one, as to be a writer painter, singer, etc. is
the same, you just have to be it.
The only thing that differentiates us from others is the ego: if I
I think it I am.
Indeed that is what, I am sure, an artist is: an egocentric.
So it is with art and other crafts that do not mean to work for
another but for your inner being.
The artist, whatever his manifestations, is by nature a
egocentric.
He believes in his abstract metatranca*, believes that he has such a great idea
he should tell it to others, and bet his life on his thesis.
Others as they don’t dare to tell their own, if they had one,
then listen and are seduced by so much certainty in the
projection they see, so that sometimes apart from believing myself a graffiti artist I believe I am
writer, singer and even underground art teacher, but only
when I’m with me.
Since I have sufficient capacity for these trades I hope to be able to
channel in the art whatever ego I carry in me.
I hope I never stray from the path because I think that the ego of the
politicians like that of the philosophers is a right ego and that it clearly picks up
the truth and logic.
I prefer the artist, I think the ego of artists is more
playful and the dogma lets it be and it becomes innocent, abstract and
untranslatable into words, sometimes mixed with lies and
truth and good and bad. I identify more with the plastic artists,
poets or musicians.
The artist is able to drain the two poles with no interest in
manipulating it to one side or the other, only showing it and abstracting it in
sound keys (as in music) or in symbols (as in the plastic).
Not of the logical or the serious and of sensations, disgust, love,
happiness, sadness; self-searching.
But I defend at this point my trade because it is the visual that governs
the universe.
Nobody escapes seeing even when we don’t see or when we sleep, and
the shape, lines, colors do not know anything of bad or good
or of reason or of dogma but are essentially the basis of them all.
We constantly visualize within us, without being able to
stop, and can be either a flower that is opening or the explosion of an atomic bomb
and smoke spreading into the sky. As seen on TV an
image of an atomic explosion leaves me anesthetized seeing the phenomenon
for although on its passing all is destroyed my brain only collects the bizarre.
So much majesty, form, color and expansion; and thank goodness
the TV or PC exist to view them safely.
So symbols synthesize what I see and my mind and my arm translate it
when I squeeze the spray can because as well as being self-centered I have no other
medicine to throw this fucking thing out of my head.
The tool that only fits in my arm is the Spray can, it is with it that
I can best express myself at the speed I think.
Hugs and Kisses and enjoy my little work.

Translator’s note:
*Metatranca is a colloquialism in Cuban culture and academics referring to intellectual discourse characterized by the use of arbitrary, undefined words and phrases, imported from barely known languages with the intent of faking wisdom.