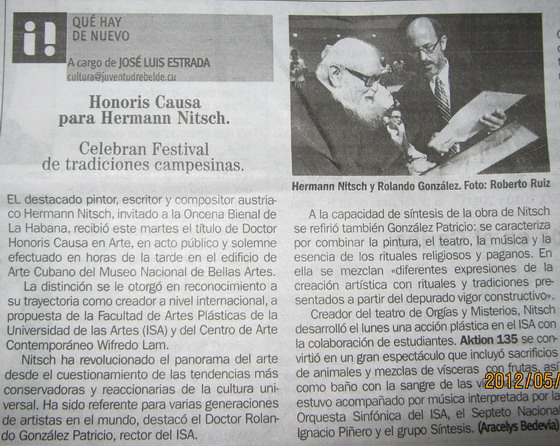 The purpose of the Eleventh Biennial of Havana, as in previous editions, is to show the art being made in our country as well as in the world and in other lesser-known regions. From the eleventh day of this month until June 11, the entire capital has been converted into a gallery, exhibiting works by more than one hundred eighty artists from forty-three countries.

The main objective of this Biennale, dedicated especially to the so-called third world countries, is to draw in and to interact with the viewer, in the widest reconciliation of dreams, utopias and artistic practices of popular imagination.

Now, reading in the cultural page of the newspaper Juventud Rebelde on Wednesday the 16th of this month, the article on the octogenarian Austrian artist Hermann Nitsch, I could not help but feel disgust and indignation, with his performance Aktion 135.

“It became a great spectacle that included the sacrifice of animals and the mixing to their viscera with fruit, as well as bathing with the blood of the victims, which was accompanied by music performed by the ISA Symphony Orchestra, the Ignacio Piñero National Septet and the Synthesis Group.” (Aracelys Bedevia)

This distinguished painter, writer and Austrian composer, guest of the Eleventh Biennial, on Tuesday received an honorary degree in Art.

With all due respect that this artist merits for his career in the arts, I can not at all agree with this work, which includes the useless sacrifice of animals. Of course, this happens in a country where there are no laws that protect civil societies and protect them. It is useless to raise my voice here, where there is no echo, but it would be good for the protective institutions of animal life, which exist and function in the vast majority of civilized countries, to take account of this criminal act, where art is taken as an excuse for animal abuse, in the eyes lazy and complicit officials and spectators.

It is clear once again that when a government cannot assure its citizens bread, they give them circuses, and in this particular case, one stained with blood.