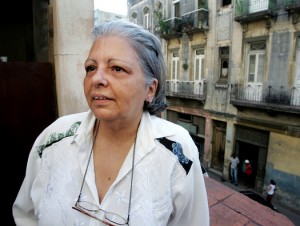 HAVANA, Cuba, January www.cubanet.org – The building where I live has 42 apartments and three floors. Most of the time did not see anyone in the hallways. However, on January 13, at 9 pm, for the second time since the last beating I received (November 19)  a group of about 8 or 10 neighbors stood at the door of my house to tell me that “they will not allow more meetings.”

Act two, they then began a rally of repudiation in front of my apartment with a television they placed and videos, apparently about the opposition and myself. Since November, when the dictatorship decided not to allow meetings at my home, they have filled the corridors, the stairs and the wall opposite my apartment with pictures of Fidel and Raul Castro and banners and a mural in which there’s is newspaper Granma with a picture of me and offensive words.

During these months, Wednesday after Wednesday, the political police have been at the entrance to the building, accompanied by the National Revolutionary Police and two or three of the neighbors have stood at my door to prevent entry to people who want to access to my house, and even to arrest or kidnap them, with the idea of leaving them stranded far from their homes*.

It is impossible to live with the political police harassment of me. I practically can’t open the windows since they boldly look inside. They have taken a common area that gives access to my house and have put a locked gate, which means I can not even clean the outsides of the windows.

They let the water run under the door to the apartment, also in the kitchen window overlooking the courtyard of one of the members of the Rapid Response Brigade, just to point out some of the situations that I experience in the day, although it is known that in April 2013 they beat me and sprained my left shoulder.

Although the Municipal Director of Public Health was in my house and ordered fumigation with a special liquid spray for asthmatics**, directing that they weren’t do it again for another 3 months, which is how long the chemical lasts, the neighbor continued to demand that they smoke the common area, knowing that afterwards I’d have to use my inhaler.

I have tried to legalize my stay of 15 months in this apartment and they haven’t allowed me to, on the pretext that I made repairs where I lived before, so won’t allow the house to be recognized in the Land Registry.

Last Thursday, one of the people who are usually in the door watching me, pushed me to the exit of the store on the bottom floor. I was accompanied by two dissidents who plan not to let this happen again without the aggressor having an answer. I tried not to act violently, but so much ignominy exhausts me.

Although they use these citizens as a front, it is the political police who don’t allow the meetings of the Cuban Community Communicators Network, which obviously upset the regime. Who is going to believe that it’s the outraged neighbors who don’t want us to meet?

I have asked my lawyer, Dr. Amelia Rodriguez Cala, who took the request to the Board of State Security of the Provincial Court, who judged us, to releasing me from parole, because I’m as much of a prisoner as I was when I was in the Manto Negro prison.

When they came to deliver the parole document, 22 July 2004, it was presented by an officer of State Security and another Jails and Prisons. Before taking it in hand, I asked, “Does this has any limitation?” And the official of the political police, who worked as an instructor at State Security’s Villa Marista prison, replied, “The only thing you can’t do is walk on the grass.”

While it is true that most of those who are part of the internal opposition know intimately the harassment of the regime and have suffered from it for many years, it is very difficult to live with this situation 24 hours a day. I feel alone in Cuba. My family emigrated in its entirety, there was no one left even to bring me anything in prison. However, I prefer to be behind those bars, because then I’m a prisoner, formally, and the difference now is that I’m still a prisoner but without the political cost to the regime.

Maybe some people think that a solution would be that we stop meeting at my place, but to cede that space would imply making the dominoes fall one after the other and consenting to other abuses by the regime.

Although most members of the Cuban Community Communicators Network attend the weekly meetings, they are human beings who are being abused in word and deed. For example , one of the members of the Group of 75, Arnaldo Ramos Lauzurique, who is 73-years-old, the officer by the name of Buck hit him and broke his glasses (prescription glasses). Still, he keeps coming to my house every Wednesday.

To be a part of the United Nations Human Rights Council is to approve the regime that acts in this way with the internal opposition, with the farce that is an enraged revolutionary people, that does not allow the “mercenaries ” to act; while the “good cops” take a position to prevent the “masses” from going to harm those who disagree. Such is the country. I’d rather go back to prison.

*State Security commonly detains people briefly, simply driving them far from their homes and leaving them stranded with no way home.

** Marta is speaking here of the regular fumigation for mosquitoes