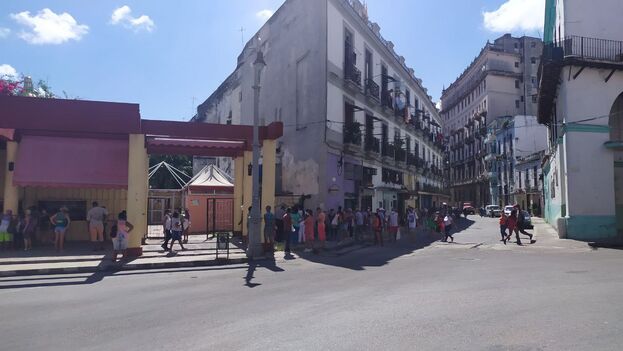 The new directive now is for stores to ‘disguise’ their lines (14ymedio)14ymedio, Havana, 18 August 2020 — Lines continue to be the common denominator for the vast majority of Cubans. Line up for the bank, line up for the market, line up for the pharmacy, line up for everything. In front of each store there is a line. And now, as this newspaper was able to verify, the new strategy is to hide them.

“Now they are hiding the line, at a minimum three away. You pass by and you can’t see a line anywhere, you see the empty store with two or three people and it turns out that the line is around the corner, 1,000 feet away,” a young man waiting in line tells 14ymedio. “I have seen that in all of them, they say it is so that you do not see a crush at the door of the store. That is how they are in all the ones on Galiano street and also those on Reina. They say that is the directive they have been given.”

He also says that he has been standing there for more than four hours “in the sun” and that he has given up hope of buying chicken or ground meat. “I arrived at half past nine in the morning and I got number 36 for the second round, but everything goes very slow. The first 45 took two hours to enter and it is already noon, I do not think I will get in in time for anything that interests me,” he laments.

Daynier Acosta, a resident at 12th and 25th streets, in El Vedado, told this newspaper that the police pass through his street at night chasing away those who form lines. “The patrols pass with the reflectors pointing into the hallways and the stairs, looking for people who start making lists in the middle of the night to organize the lines.”

According to the Prime Minister, Manuel Marrero, 3,054 groups made up of 22,281 people have been created to persecute the coleros, hoarders and illegal sellers of currency. He also pointed out that the Revolutionary Armed Forces, the Police and the Committees for the Defense of the Revolution will be in charge of this task that is already underway but which began to be arranged since the end of July.

Miguel Díaz-Canel said that the Government is acting “against people who stand in line to profit, promoting illicit economic activity,” a statement focused on insisting that it is not acting against the elderly or humble people, but against “crooks, those who take advantage of others.”

“Here in the corridor of my building they start in the middle of the night, I have seen it for months,” continues Daynier Acosta. “But I must clarify, there is everything: I see people who certainly stand in line for others and then they charge two or three CUC (Cuban convertible pesos) and I also see people who stand in line for themselves and their family and thus guarantee they’ll be able to buy what they need. If you wait to stand in line at the “normal” time, at the moment the store opens, it is very possible that you will not achieve anything and leave empty-handed. Nobody wants to waste their time.”