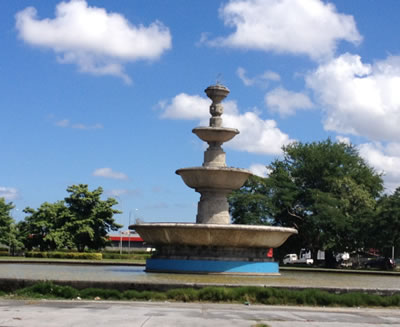 I’m in the same park where thirty years ago my sister and I ran and played. Two girls turning pirouettes similar to ours hide behind some bushes. However, there is something very different in this deja vu: missing is the fountain with its sound of rain falling on marble. With rare exceptions, a very similar panorama repeats itself in every Havana plaza. Scarcity, negligence or urban policy, no one can explain it, but in recent decades this city has lost the moist presence of its fountains.

Guided by my memory, I decided to take a water tour. At the corner of Belascoaín and Carlos III all that is left of that pond where we dunked our hands and sometimes our feet is an empty tank. A few blocks further on, rusted iron marks the site of one of the more ephemeral fountains of my memory. It only lasted a few weeks after its inauguration in an official event, speech and all. Known as “Paulina’s bidet,” near Sport City, now and again downpours turn it into a greenish lake with tadpoles. And don’t even talk about the Fountain of Youth — drab and decrepit — so close to the sea, so far from its former glory.

In a brief investigation of why this city has lost so many sources, I find varied and revealing answers: “The problem is they stole the pump that supplies the water,” an official told me. At another site an annoyed employee assured me, “We had to close it because some people ended up bathing here, because they don’t have showers in their homes.” The nicest was a lady who looked at me with narrowed eyes while reproaching me, “Oh my, what a tremendous memory you have, this fountain hasn’t worked for decades.” In the center of Plaza Vieja stands one of the few that still functions, surrounded by an imposing fence, to keep the neighbors from taking the precious liquid bucket by bucket. My water tour ended, desert-like, at the well-known La India fountain, also without a drop of H2O.

As residents of this city we must do something so that our children can experience the beauty of parks with fountains. I know there are other priorities to be resolved, but how gray is the asphalt, how solitary a little square and how oppressive the heat without this sound of water skipping over the stones.