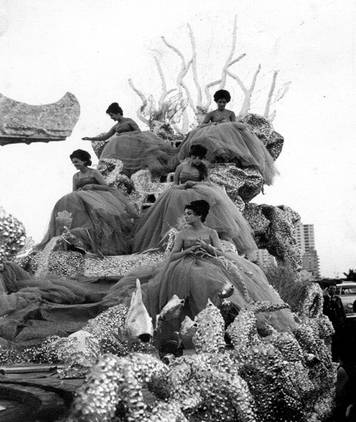 When February began, the mass media (radio, television, print) began to promote the parties of King Momo.  The whole city was infected by the expectations of such a grand celebration.  Old and young used to enjoy these festivities so much that they were always celebrated in this month, for four weekends, leading up to Lent.

Days before the chosen start date, already utility poles on the city streets exhibited, by way of ornamentation, contest-winning posters, as well as photos of the Queen and her Ladies in the windows of the major stores, which had been chosen by a prestigious jury.

I remember when I was a girl, my family used to rent a box at the carnival in order to enjoy more comfort while we watched the endless legion of beautifully festooned floats pass by, with young girls on board, sometimes very dressed up and other times scantily clad (confronting the cold February temperatures), according to the theme the sponsors wished the rolling stages to represent.  Then came the convertibles cars and trucks, beautifully decorated.  Of all this, what without a doubt raised expectations most was the float of the Queen and her Ladies-in-Waiting.

The climax was the passing of the troupes with their colorful costumes, some of them carrying enormous lanterns, following the rhythm of their original and well-studied choreographies.  Among the most acclaimed always were the Guaracheros de Regla and the Alacran, this one the oldest of all.  Another spectacle that captured most attention was the risky acrobatics of the Acrobatic Police Motor Squad, with their red jackets and their snug black pants, highlighted by tall boots and varnished leggings, driving their impressive Harley-Davidson motorcycles.  The ride always opened with a profusion of fireworks.

Once the parade ended, we children, defying family prohibitions, threw ourselves into the street to gather the streamers strewn along the way and made big spheres with them to roll down the street.  The one who made the biggest felt, without anyone saying so, like a kind of champion.

The parade had a long route, coming out from the premises of the old Sports Palace, following the whole Malecon until taking the Paseo del Prado, turning at the Fuente de la India and traveling back again to the Prado, resuming the Malecon until the point of departure, where the floats were parked.  Many people during the parade used to cross from one sidewalk to the opposite one to again see the floats on their return trip.

1959 arrived, and these happy celebrations were losing their splendor.  Slowly at first and later sharply, when all businesses were nationalized and their sponsorship was lost in the absence of advertising.  It is noteworthy that the Havana carnivals before this year were considered among the world’s most famous.

I managed to reach a little of the brightness that they still had when I was elected Morning Star in 1963.  By then, the terminology had already changed from Queen to Star and from Lady to Morning Star because the former were considered expression of the petty bourgeoisie.  It was no longer enough to be pretty and cultured and have good manners; now an important element as well was being an “integrated” person (working or studying or participating in political events).  Also the gifts offered to the winners stopped being relevant.  They still kept the tradition of displaying big photos of them in the store windows.

I remember by then I worked in the Foreign Trade Ministry in one of its enterprises. One afternoon, the syndicate secretary passed in a great hurry, touring all the offices, to announce to us, all the girls who worked there, that at the end of the workday we would not leave because an assembly would be held to elect the permanent cane cutters for the sugar harvest, and also the star who would represent the enterprise in those festivities.

To my surprise, I was the favored one.  The next selection would be among the more than 12 enterprises that composed the ministry, and this would determine who would be its representative.  I was elected again. Later competition was held among all the agencies that belonged to the Public Administration sector, to choose the Star herself, who would then compete on a national level.

So it was that one night I found myself in the Sports Center, competing with all the stars from all the syndicates.  Then I was elected first Morning Star of the Havana Carnival of 1963.  I never again went to those celebrations in spite of the fact that during the next nine s received invitations to the Presidential Box.  Now the carnivals that I enjoyed so much in my childhood had disappeared, and all that was left of them was a sad caricature.  In spite of the celebration of all these festivities, including this one, they were transferred “by decree” to the month of July, just when the heat is unbearable.

This weekend there will be a sad caricature of the carnivals on a reduced route along the Malecon where alcoholic beverages and repeated gastronomic offerings will abound.  Vulgarity and marginality, as is now customary, will reign at these celebrations.