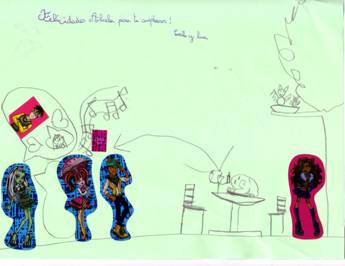 Yesterday was my saint’s day. I have not gotten excited about it for a long time because, with each passing year, I have had to say goodbye to many important people in my life.

In the 1970s I had to say goodbye to my three beloved cousins, my aunts and my uncles. At that time we were a very tight-knit, extended family, frequented by a large number of close friends. They later left one by one—my childhood friends, my first boyfriend, classmates, other friends… The face of the neighborhood changed and, for me, took on a feeling of emptiness. The changes taking place in the country both entertained us and drove us crazy, but they did not make up for the losses. Some things are impossible to replace.

Eventually, new families came along, and with them new friendships grew. Our own grew after my sister and I got married. Later, my sons and her daughters were born, and some part of the lost happiness returned.

The 1980s arrived, then the 1990s, and with them the blows that once again broke up the already decimated Cuban family. Once again I had to experience the pain of seeing those whom I loved most—my sons—leave. My three beautiful granddaughters were born outside the country, granddaughters I hardly know.

Many of my new friends have also left, and many others want to. Nevertheless, God has placed in my path wonderful people with whom I have recently established new bonds of friendship and love, which I hope endure.

Yesterday was a beautiful day, in spite of all that is going on in the country which concerns us. The new people in my life came over to congratulate me and to share some very pleasant moments. Those who could not come did so by telephone or through email. Ultimately, against all odds, I had a very happy birthday.