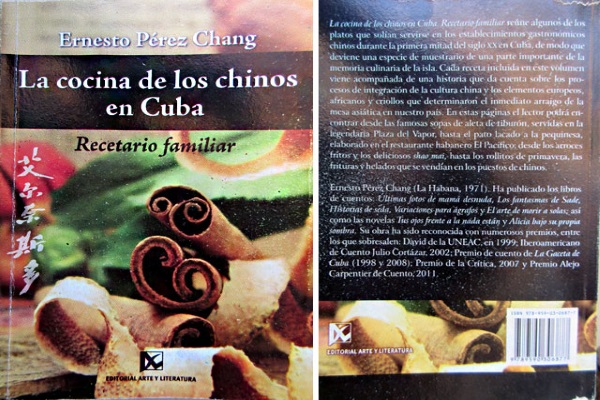 “The cuisine of the Chinese in Cuba: a Family Recipe Book” goes well beyond what its title indicates, becoming an homage to all families of Chinese descent.

Cubanet, Luis Cino Álvarez, Havana, 13 March 2015 — During the recent Havana International Book Fair, although copies were available for sale, no public presentation was allowed of “The Cuisine of the Chinese in Cuba: A Family Recipe Book” (Editorial Arte y Literatura, Havana, 2014), by Ernesto Pérez Chang. Evidently, this was the punishment for his collaboration with Cubanet that the censors imposed on the writer, who has won various important national literary prizes, including, in 2002, the Julio Cortázar Iberoamerican Short Story Prize.

But it is not of the censors’ mischief that I wish to speak, but of the book.

“The Cuisine of the Chinese in Cuba: A Family Recipe Book” goes well beyond what its title indicates, becoming an homage – not only to Hoeng Chang and Doña Lola, the author’s grandparents – but to all families of Chinese descent who, despite material scarcities, difficulties and prejudice endured, have kept alive the traditions of their ancestors.

They are recipes for almost 200 Chinese dishes, patiently compiled by the author, which provide Pérez Chang the unifying theme for this project. In his commentaries on each recipe, he gradually develops a composite history of his grandfather and of some of the more important exponents of Chinese cuisine of that Havana of the first five decades of the 20th century (which seems unimaginable without smelts, Chinese soup, and fried rice).

Many recipes are taken from old books and magazines, transcribed by elders who had been cooks in the old Chinese eateries in Havana, or which the author discovered when he travelled to China in 2010, a trip he does not consider his own, but rather, “the symbolic return of the subject of that photograph that I carried in my pocket.”

However, most of the recipes, and suggestions about proportions of ingredients and variations in preparation methods, come from the notations of his grandmother Lola, jealously preserved and practiced by her family throughout many decades.

As her grandson Pérez Chang tells us in the book, Doña Lola was not Chinese, but rather of French and Spanish ancestry. She was from a well-off family, and caused a major scandal at the time she escaped from her family home to go live with a handsome Chinese man who sold fresh fish door to door and whose name was Hoeng Chang (but who, upon arriving in Cuba from Canton in the 1920s, changed his name to José Chang).

Chang and Doña Lola passed on their love for all things Chinese to their descendants, including the cuisine – although in this regard, it was no small feat for the family to obtain, in Havana, ingredients such as mussels, ginger, celery, tofu, sesame and soy or oyster sauce.

But the effort is worth it, and not only for the palate – but also for the soul and for one’s dreams, which is the most important.

Pérez Chang explains in the preface, “It seemed to us all, to my mother, to my grandmother, and my sisters, that of my grandfather there would be no trace left behind, because he was a simple man, a poor man. But we did not delay in realizing that despite his poverty, he had bequeathed to us a country not only of dreams, nor a kingdom of words, but a place, a dimension of infinite flavors and aromas which we could reach just by turning on the stove and combining the ingredients in the proportions that he had taught us – every dish achieved with his mastery was a kind of return of the grandfather and a consummation of his immortality.”

At times, among the steaming pots, María Elena Chang and her children and grandchildren have thought they have seen Lola and José, the guardian spirits of the home. It is comforting to know that they are always there, that they do not leave the family, under any circumstance.