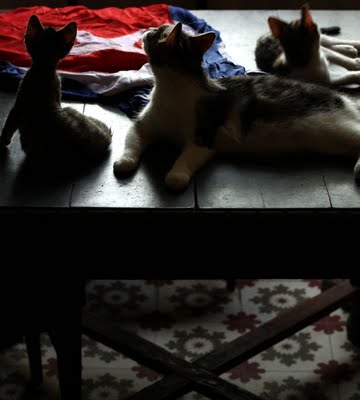 Let yumas [Americans] do and undo in Yuma [America] as they democratically please. It would be too much already if from Cuba, we Cubans pretended to dictate norms in American politics. It is their Congress, their Committee, their Foreign Affairs, their House of Representatives or of Repression, their Obama, their Cuban-American exile. Their baggage.

If the heavy, or pedantic tanks wish to go back to April of 1961, or to October of 1962, let them go back. It is their sovereign right to legislate or counter legislate. Their paycheck. Cuba is only one more section, not the center of the world to them. Almost a curiosity. Fire to the pot until the bottom burns. Better that way.

Never was Cuban society more real-socialist than when the Island’s isolation was absolute (and not only on the part of the US, but also of half of Latin America). Since 1898, without yumas this was a land of barbarity. No worst beating than that of your own.

In the seventies, when a tourist was a rara avis, almost always a G2 spy, there wasn’t any oxygen for anyone and the nation simply went the way of North Korea. Come Mao or high water. Wars in all of Africa. Guerillas in all of our hemisphere. Thousands of prisoners, then thousands and thousands of emigrants. Ah, we were so free. Our hands were so free to dictate within all of our Archipelago CUBAG. The imperialist eagle was only a still shot of what awaited us outside of Cuba, according to ICAIC news by Santiago Alvarez. Never did people think so little and so badly within Cuba as they did then. Literature died. Television aroused disgust. There were no minorities (nor queers). The iron curtain fell, and when it seemed that Carter and Billy Joel were going to raise it a bit, Fidel Castro moved heaven and earth to make sure a decade more of Republican conserva-tatorship followed in the White House.

It is my opinion that, due to a lack of imagination and an excess of politicalogic technicalities, history must repeat itself now. Why rehearse an innovation? Why play XXI century? Who said the future is around the corner? Who thought of not following the retrovolucionary beat of the government in Havana? No improvisations. More of the same. Pressure will make the grandfathers of utopia fall. This time it will work. I promise.

Fewer yumas in Cuba (State Security expels them for that reason and not for ideological ones), fewer tourists, less pleasure of finding each other face to face, fewer digital gadgets, fewer orgasms in English (oh my oh my), less white skin pink cheek, fewer college magazines, less chewing gum, fewer interviews, fewer invitation letters, fewer visas, less Interests in the Section, fewer green cards at the excess of white cards, anyway…Fewer years two thousand, more of last century and millennium. Less capital, more socialipsism. Put just a little more pressure on the mixed arabesque guy, darn it, and you’ll see how by the end of the year half of Cuba will await him with a part-time job in a Hialeah factory.

They are little foreign Fidels.

Does it take so much to admit that the Revolution was nothing, and that, however, that nothing won? Why should we have to pay with hunger and sickness? Why don’t thousands and thousands throw themselves in another Freedom Fleet and you’ll see how we give each other a great hug of transition, millions and millions in the very wall of malecón. Why should we continue with another beat of cutting here and dialogue there? It is a reduction to absurdity, but absurdity is our daily bread as a nation here and there: Couldn’t we pretend for a year that Cuba is the most democratic nation in the planet, and treat it as such, maybe in a year it really will be?

Oh, please. Let’s admit it. What we want is to kill and to have us killed. There are no luddites. There is no delirium. When our democracy gets here it will be emaciated. Anti-American. The only things this country does not tolerate right at this moment are thinkers as terrible and dumb as Orlando Luis (I already said it myself to save them the commentary).

Yesterday’s dead are a permanent fatum in favor of the Revolution: executions occurred at first not to take power violently, but rather to never let go of it without the same quantity of senseless blood.

Work hard. You’re winning. The massacre will be more than a media one. Its first victim guarantees it.