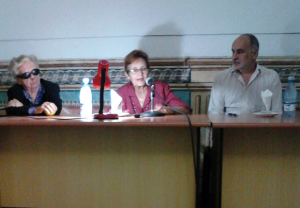 Havana, Cuba, December – http://www.cubanetorg – It’s not a secret for anybody that, in general, youngsters favour transformations which advance social development. As far as Cuba is concerned, the majority of young people who are academics and researchers urge that the economic changes being implemented by Raul Castro’s government be taken forward more rapidly. And journalism should not lag behind.

This understanding was corroborated in the winding up of the course entitled “Journalism is not a job for cynics”, which took place at the Alejo Carpentier charity. On this occasion, the journalists Jesus Arencibia and Ricardo Ronquillo, both from the newspaper Juventud Rebelde took part in a panel, along with Doctor Graciela Pogolotti, president of the above mentioned cultural institution.

The first one to mention it was the youngest of the panelists, Jesus Arencibia, who, to the astonishment of some of the people present, strongly criticised the present situation of the Cuban press. Responding to the question, “What journalism do we need today in Cuba?”, Arencibia stated that we lack media able to function without approval from above; and, pursuing this line, argued that editorial policy should not be the preserve of a political party. Arencibia also questioned the activities of the official Union of Cuban Journalists (UPEC), who insist on not mixing up journalism with commercial publicity, without saying anything about political propaganda which dominates the work of the news-pages, the radio and the television in our country.

Right after that, Ricardo Ronquillo, deputy director of the Juventud Rebelde daily chipped in. Although at intervals he tried to continue his predecessor’s critical comments, Ronquillo explained that his suggestions were directed at “ensuring that the Cuban press was equal to the challenge of the revolution.” According to this panelist, we are watching a structural crisis in Cuban journalism; driven by a lack of resources in terms of journalists and the press, as well as the loss of their credibility due to the role they were playing in the service of the governmental institutions.

Referring to a situation which should not be repeated, as it demonstrates the inflexibility which impoverishes the work of the press, Ronquillo recalled what happened subsequent to the revelation of the announcement that Fidel Castro had passed the leadership over to his brother Raul. According to the journalist, it was incredible that no-one in the Cuban press will comment about this significant event. Nevertheless, we can only suppose that past events like that have been brushed to one side in the heat of Raul Castro’s protest against media secrecy.

Doctor Pogolotti, the senior member of the panel, gave us the most conservative presentation. After talking about her times as a journalism student in republican Cuba, she applied herself more to the form as opposed to the substance when it came to assessing the kind of press we need. In her opinion, the Cuban media should abandon headlines which don’t invite you to read; they need to improve the image and graphical design which accompany the information; and they should also be able to count on journalists capable of investigating the most varied aspects of our reality. In essence, this representative said almost nothing about the official culture of government control of the press.

The panelists’ contributions were lengthy and there was not time for the public to express their opinions or ask questions. Notwithstanding, in the door of the institution, I was able to hear the opinion of a young student of journalism:

“We haven’t moved forward at all in eliminating secrecy and self-censorship. It seems as if Mr. Ronquillo has forgotten that, following our government’s official declaration about the capture in Panama of a North Korean ship carrying Cuban arms, not one journalist dared to open his mouth …”