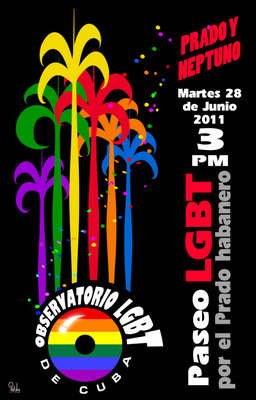 The Paseo del Prado displays its beautiful lion sculptures, cast from the ammunition and weapons from our war of independence. When it opened with its broad marble benches and bordering shade trees, it quickly became a place for meetings and recreation. Part of its wide structure was built exactly where the Wall of Havana once stood, dividing the citadel within the walls from the city that grew up around it.

Today, this avenue runs between the historic town full of tourists and the other part of the capital, a place of broken streets crowded with people. The bronze felines, however, retain their nobility, the old dream of grandeur that caressed the nation at the beginning of the twentieth century.

The Prado, our Prado, also lived through times of outright neglect for having been conceived and built during the Republic. When history was re-written and the victors tinted the past in sepia not even the manes and teeth of these statues were safe from the diatribe. Something so central was forgotten, not by those walking by, who continued to visit them, but from the official discourse. The wide roadway with its central park was virtually never mentioned on any television program, nor were recreational or political activities convened under the shade of its trees.

But lucky vendors, children living nearby, lovebirds looking for a dark place for caresses, took advantage of the lack of institutional interest and made the Prado their own. On one of its most central corners a “swap site” sprang up, a kind of alternative market to trade houses in a country where their buying and selling was still prohibited.

Then, much later, the City Historian noticed the long-ignored esplanade. He undertook a brief restoration process, improving the tree cover and restoring some lampposts. But the Paseo del Prado remained in the hands of passersby and kids because, even today, every inch of it is evidence of a magnificent past that upsets the powers-that-be. The Plaza of the Revolution in contrast, with its mass gatherings and lengthy speeches, has never been able to function as a place of spontaneous congregation. It is the great difference between a place where people choose to be, to play with their children, to rest for a few minutes before continuing on their way, or to watch the sun set, and that other site where they are taken as a mass, like a platoon. 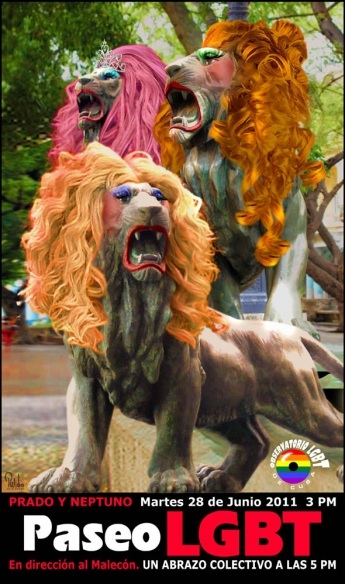 It seems that with their defiant fangs, the lion sculptures make a mockery of the decades-long institutional abandonment. Despite a desire to downplay its importance, the Paseo del Prado remains the preferred site of those who come from the provinces and want to bring back a photo of their stay in Havana.

Perhaps it is precisely this history of splendor and neglect that has made the Paseo del Prado the chosen site to celebrate Gay Pride Day in Cuba. A community degraded, for decades trapped between a machismo culture and the repressive politics of the State, wants to take to the streets on June 28. The call has been launched by an alternative group that protects the rights of gay, lesbian, bisexual and transgender people. The pressures of the political police on the main organizers have been felt from the moment of the announcement, but so far the idea survives.

Meanwhile, Mariela Castro, daughter of the current president, continues–from her Center for the Study of Sexuality (CENESEX)–to deny the need for this type of public demonstration. Instead, the well-known psychologist led events on May 17, a day to celebrate the World Health Organization’s ceasing to regard homosexuality as a psychiatric disorder.

But from there to permitting the Cuban LGBT community to spontaneously join together and take to the streets to celebrate its diversity is a long stretch. Until now, the campaign to accept plurality in love has been kept within the hands of official institutions, without letting those whose interests are represented represent themselves. This, of course, characterizes the inability of free association suffered by Cuban society at all levels.

The choice of the Paseo del Prado as a site for the event, however, benefits and protects those who manage to reach it. The tourists with their restless cameras, curious children frolicking on all sides, the unsuspecting lovebirds embracing on the benches, will act as a protective shield without their knowing it.

And the lions, ah, the lions! They will have their moment of glory once more, among brightly colored costumes, flags, streamers and songs, and the handshakes of diversity. Today, claws and manes cast in the bronze of a past war will seem less aggressive, with lower doses of testosterone, and with a bit more of the sparkle of life.