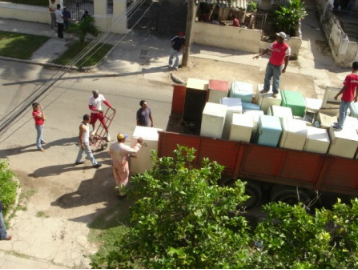 Monday, November 24, 2008, 11:00 am:
I came running from work to meet the social workers who take the old refrigerators. Atmosphere of madness, all the old refrigerators rolling down the stairs, they say a neighbor was on the edge of tears. I too was a little sad, it hurts to see them rolled away after nearly a half century of working without fail. My Mom’s fridge, for example, they gave it to my grandmother like a wedding present, she was born in 1919 and got married when she was 16. It’s impossible to be indifferent to its death. I understand OLPL and other friends who aren’t changing theirs, but truly for me, although I’m sad, I prefer the change. In addition, it’s expensive to get rid of them, because I’ve been told there are people out there who think it is only exchanged, but no, it’s exchanged and charged: value 260 CUC. Luckily you can pay in installments. After 50 years they realize if they don’t sell them on the installment plan they’re not going to sell them, because with what are we going to pay.

There were two guys, I don’t know where they went, who loaded the refrigerators and took them down for you for 20 pesos.

6:30 pm:
The truck with the new ones arrives, as Claudio calls them, the “Comandantes Haier.” The odyssey of bringing them up and more, and thankfully with Yoani’s camera I was able to capture all of it, most of all Claudio and Ciro, posing before starting up.

For the social workers, who didn’t get lunch, I made them coffee. They told me they hadn’t even given them a snack the whole day.

Translator’s note
The “Haier Group” is a Chinese appliance manufacturer with a contract to supply energy efficient refrigerators to Cuba.

Note: In conjunction with Miriam Leiva’s post about bank loans to buy saucepans, Translating Cuba has decided to re-post an old series of posts Claudia Cadelo about refrigerators, to give our readers a fuller understanding of how things work in Cuba. This is Part 4.