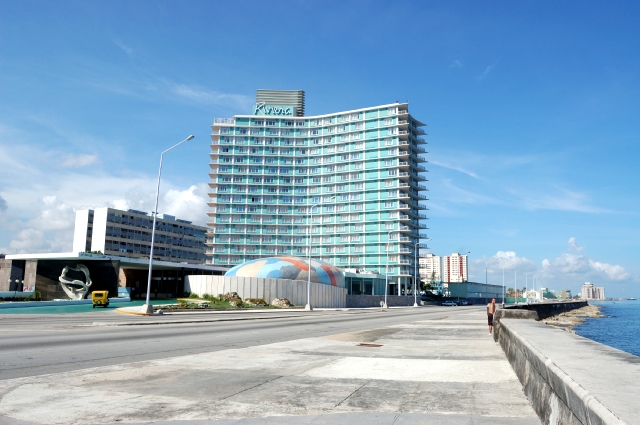 Night falls suddenly in Havana and Billy, 81, empties out the money he collected in a colourless plastic bowl in the public toilet where he works.

He counts the small change. With a nervous uncontrollable tic, his mouth shakes. His hands also tremble. It’s Alzheimer’s that is devouring him. He trys to hide it. Impossible. He should be in bed attended by his family. Or in some nursing home.

“I’ve been in three hospices and it is better to be dead. Bad food. No care. I preferred to go to the street to find me a few pesos. I was always a creditworthy guy. Now ruin has befallen me. My days are numbered. At any time the Lord may take me to him. So what I do is take care of this public toilet for ten hours. In the morning I also sell sweets and so get more money for hot meals”, says Billy, his voice worn.

He has no home and sleeps on the floor of the toilet itself. An extremely messy room with an unbearable stench of urine and ammonia. According to Billy, the administrator of the place gave him the keys and some cardboard to sleep on. Someone else gave him an old Russian portable radio. In the evening he listens to baseball and traditional music.

“I was a successful man. The best player of poker and pool that was in Havana in the 50’s. I earned much money. One cold January afternoon I was in the lobby of the Plaza hotel when a suited man, small and with glasses, approached me and invited me to a Ron Collins. It was the Jew, Meyer Lansky. He made me a proposal”, recalls Billy as he rolls a cigarette using butts collected in the street.

Lansky offered him a place in a course for dealers in the school that was running on the roof of the hotel, the first of its kind in the city. Around a year later he had become a ‘crack’ dealer. Whoever dealt cards also worked as a roulette croupier.

But in ’59 Castro arrived and he ordered the closure of the casinos. Lansky and Santo Trafficante had to pack up. He then worked in the casino of the Havana Riviera. And eventually became unemployed. He didn’t possess the revolutionary spirit. He was never militant nor cut sugar cane.

“I had my savings and a ’58 Chevrolet that was a gem. I threw away money on drink and prostitutes. I left the house to the mother of my two children. I sold the car and set up a ‘burle‘ (illegal gaming casino), but I was caught in a police raid in the 80’s. I spent five years in prison, for prohibited games”, he points out. Later on he slowly eats some cold pizza, bought hours ago. It is his dinner.

Having reached old age the neglect of his family is taking its toll. He knows nothing of his children. He tries changing the subject when asked about them. “Nothing matters now. I will be a better person in the next life. My gift was my hands. Alzheimer’s has robbed me of the ability to handle a pool stick or play tricks with a deck of cards”, he says, after cleaning the filthy sinks and toilets without detergent.

He switches off the single bulb. “I’m tired, and tomorrow is another day. The bad thing about being old and sick is that memories and nostalgia beset you without warning. I was young and handsome. Lansky’s friends nicknamed me ‘Billy the Kid’ for the speed of my hands in the game”, he says. And throws himself like a heavy bundle on the cardboard that serves as a bed.

He begins to cry and turns his back. He does not want pity. Nor does he allow photos. Old Billy still has his pride.