Free Gorki: Defense exhibits that he is both artist & musician 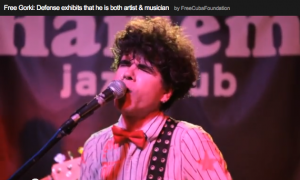 Gorki Luis Aguila Carrasco is the lead singer of the Cuban Punk rock band Porno para Ricardo. He has been targeted in the past for his political beliefes and threatened with prison. On September 30, 2013 agents of the Castro regime arrested Gorki and confiscated medication prescribed to him by a Mexican doctor for epilepsy that the Cuban punk rocker has suffered with since childhood. In a Cubanet interview on October 16, 2013 Gorki explained his situation: “I don’t know what they accuse me of, nor do I have a trial date.” That has now changed. On a citation for summary judgement dated January 27, 2014 Gorki is called to attend a summary trial on February 11, 2014 where he will stand as the accused. Under the rules of the game of the Castro regime he is already guilty. It is up to all of us to campaign for his freedom. Follow the hashtag #FreeGorki on twitter. Please sign the Avaaz petition that is circulating. Castro apologists claim that Gorki is not a musician and that is the reason for this playlist to demonstrate that they are lying.