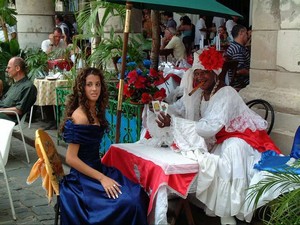 Dressed like a gypsy. Wide skirt, brightly colored scarf. As she casts the cards for her customers, she smokes a mop of cheap tobacco. Her name is Luisa, and although she claims to be 52, her sad eyes, wrinkled face, and decayed teeth give her the appearance of an old woman who has already reached one hundred.

She is one of the many fortune tellers who make their living in Havana by foretelling the future through Spanish cards or by peering at the lines in the hands of their customers.

In five minutes, in a calm voice she tells you what will happen with your life in the next decade. She foretells misfortune, foreign travel, money, or marital infidelity.

At times, when the deck of cards sends a message, she sheds a tear. Luisa is an artist in her work. If “death” is whispered in the ear of the one whose future she is currently consulting, she changes her voice like a ventriloquist.

This genuine Havanan was born one rainy night in 1959 in the poor neighborhood of Carraguao, in the municipality of Cerro. Before discovering her ability to diagnose cancer or a stroke of luck by simply looking at a person’s eyes, she worked in a textile factory on the outskirts of Havana.

Her life would make a bitter and realistic novel. Like those of Pedro Juan Gutierrez. She was a laborer and a militia member. And also a prostitute. She always searched out the money that would allow her to feed her children.

In the special period — that economic, material, and values crisis that has now lasted 22 years — her eldest daughter, knowing her mother’s abilities to “see things,” proposed that she seriously take up palmistry and fortune telling.

She read ten or twelve old books on those subjects. By means of the illegal cable antenna, she observed the modus operandi of Walter Mercado, the king of astral horoscopes and predictions in the southern United States.

A friend who practiced Santeria taught her to throw santera snail shells and various tricks for extracting information from people. When she was ready, she began to prophesy the fate of bystanders in various city streets. In Cuba, where the future is tomorrow and the most immediate plans are those made for the weekend, people like her, able to foresee the future, will always have success guaranteed.

Some days she works ten hours. After listening to the predictions, some end up laughing, others crying. But Luisa always returns to her room in a dilapidated tenement, with the pockets of her wide skirt full of five-peso notes, the price charged for each streetside consultation.

“Every day I look for between 100 and 200 pesos (5 to 10 dollars). I return home very tired. I fall into bed like a stone. People to whom I have predicted a trip abroad, and it happens, locate me and then give me money or clothes, telling me, “Madam, you were right, I am now living in that country. I am grateful to you,” says Luisa.

Since February 2011, she has had a license as a self-employed worker. She pays 65 pesos a month. She claims her forte is predicting death.

“Out of ten cases that I prophesy it, nine die. Sometimes out of pity I don’t tell them.” Two months ago, she told a neighbor that he would die in two weeks. “A few days later, he came to me: ’Luisa, you were wrong, I’m still alive.’ I looked into his eyes and knew he had but a few hours left, I preferred to keep quiet. The next morning he died of a heart attack. The trouble is that a fortuneteller cannot predict her own future.”

Photo: One of the fortune tellers who casts cards for tourists in Old Havana, although she is shown here with one of the many girls who dress as folklore characters for their 15th-birthday photos.