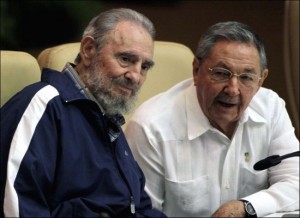 Cubanet, Luis Cino Álvarez, Havana, 11 January 2016 — I am a resentful person. I have to admit that, at least in this regard, the officials from State Security are correct, they who have condemned me as such during multiple, more or less menacing, interrogations throughout the past almost-20 years.

I am full of resentment against that calamitous abomination that some people still call “the Revolution.” And how can I not be? I would have to be a masochist, or emulate Mother Teresa of Calcutta, to love the perpetrators of the system that has crushed my life for as long as I can remember.

I would have to be exceedingly hypocritical to say that I am willing to reconcile with and forgive those who have never, in the slightest way—arrogant as they are—asked for forgiveness.

I am not a man given to hatreds and vengeances, but I cannot abide duplicity and hypocrisy. So leave me to my resentment which, in the reasonable doses in which I dole it out, will do no more harm than it already has; on the contrary, it helps me to keep going and not give up.

I cannot forgive those who thought themselves infallible, with a monopoly on the country, keepers of the keys to Paradise, with the right to decree the collective, obligatory happiness of the masses—all at the price of turning us into cogs in a machine, with no freedoms nor hope, yoked to the wagon of a mistaken history.

I cannot help but begrudge those who caused our individual dreams and aspirations—grand or simple, but valid and legitimate as any others—to be indefinitely deferred, annulled in the name of the Revolution, the Homeland and Socialism: all of which, according to what they said, were of a piece, despite the fact that the words did not rhyme, and we knew they could not rhyme.

I cannot be at peace with those who, in keeping with catchphrases that invariably posited death as the alternative, divided our families and pulverized our values, turning us into impoverished, vulgar riffraff, cynical and suspicious, perennially wandering in the desert…

My love for my neighbor (why deny it) is insufficient to be lavished upon those who fucked up my life: those teachers who, applying punishments prescribed by Comrade Makarenko, pretended to be forging The New Man; the sergeants in the compulsory military service; the psychiatrist-prison guards; the jailers at police precincts; the snitches who compiled exhaustive reports on me; all those who were wont to expel me from anyplace because of ideological divergences; the agents of the political police who “tend” to me, that is, who watch me even while I sleep…

Of no use have been the many times that they have tried to convince me that all the bad things that happened were not the Revolution’s fault—no, Man, of course not, they happened because of those extremists of which Lenin spoke—opportunists, as he called them—and all kinds of other shit. As if such as these were not the ideal subjects of a system like this!

Do not tell me anymore that those terrible events were errors—because in those “errors” have our lives been lost, and there is no getting them back…

I do not resign myself to having been one more rat in the Castros’ laboratory. The damages have been irreversible, and I do not believe that at this point they can be compensated.

Therefore, all we have left is the memory of what was and what could not be, because they prevented it, by force.

The poet José Mario—one of those who suffered the severities of the UMAP*—was right when he said that that those explanations of how “things were not as bad as they really were, it was a matter of errors committed by some extremists,” are worse than forgetting.Do not expect me to slobber. I am one of those who do not forget. I cannot, nor do I want to. For this reason, I am a resentful person. And proud of it.

About the Author: Luis Cino Álvarez (Havana, 1956) has worked as a professor of English, in construction, and in agriculture. He entered the field of independent journalism in 1998. Between 2002 and the spring of 2003, Cino was a member of the reporting team at De Cuba magazine. He is assistant director of the online magazine, Primavera Digital [Digital Spring], and is a regular contributor to CubaNet since 2003. A resident of Arroyo Naranjo, Cino dreams of being able to make a living from writing fiction. He is passionate about good books, the sea, jazz and blues.