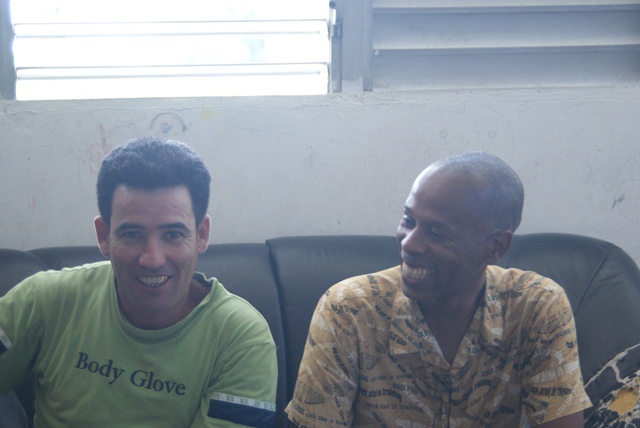 My friend Calixto R. Martinez (far left in photo), a reporter for Hablemos Press, is now on the 23rd day of a hunger strike in the punishment cells of the Combinado del Este prison. Prosecutors charged him with the crime of “contempt for the figures of R. and F. Castro.”

According to the Hablemos Press bulletin: “Calixto was violently arrested in mid-September, when he was corroborating confidential information on the handling of a shipment of medicines and medical equipment, which would have spoiled in the warehouses of the José Martí International Airport.”

Some evenings I walked with him back to my house when we ran into each other somewhere. I liked to listen to him because he had a lot of experience in arbitrary detention and forced deportation and explained to me the best way to deal with a situation of this kind, aware of the legal pitfalls contained in the Cuban penal code.

On Saturday night I received a message from Orlando Luis Pardo Lazo: “Calixto Ramón, reporter for Hablemos Press, has been on a hunger strike for 21 days in the punishment cells of the Combinado del Este prison. He has lost a lot of weight and it very frail.”

I would like to organize a vigil for my friend. Days of fasting. How can we make this despotic and violent State listen? What needs to happen?

There is not a shadow of a doubt that what the revolutionaries call “defend their revolution” means a methodology for violating human rights in Cuba. From homes to prisons. From the doctor to the political police. Beginning with the clan of the Council of State, of course. It is a family business.

Let me give an example: in the building where I live they have placed a clipping from the newspaper Granma on one wall.If it weren’t for the tragedy it has signified for so many Cubans, among whom my friend is now; to make use of freedom of expression, what can be read on it can even be funny.

More people who point out what is correct and fewer who insist on harping on what is incorrect.”

The remaining six sentences that make up the note from Granma and that my neighbors found witty, all say the same thing in different words. It would be too tedious to reproduce it in full. I want to photograph the sign because, in addition to being ridiculous, it exactly reflects what is considered moral in this society.

I couldn’t hide that I took the photo as I was focusing at the moment when one of the two presidents of the Committee for the Defense of the Revolution (CDR) came down the stairs. She’s an elderly person, apparently decent, who said to me, “The Revolutionaries in this building don’t allow you to take photos.” All this is said with a shockingly clear conscience, considering  the degrees of repression to which current Cuban society is disposed.

It reminded me of something I read in Yoani’s post about her arrest in Bayamo. I remember it like this: “Nothing is what it seems. A bed is not a bed. Nor is water for slaking thirst.”

Each of the residents of building 702, for example, would be able to participate in an act of repudiation, imprison and even applaud an execution for political reasons; none of those people, I repeat, seem like bad people. However, they are. They are very dangerous.

Most have relatives in the United States and at some point have traveled to visit them or tried to travel. They cavalierly ignore the suffering of my friend Calixto and his right to demand freedom for Cuba. If someone visits their homes they are much more nicely painted than those of Calixto, Roberto de Jesús Guerra or mine. They eat better. They have nice manners and teach them to their families.

But at some point they will become very dangerous, they are transfigured in the style of the video game “Resident Evil,” and the only way it seems possible to combat them is to be willing to immolate oneself. Otherwise every day the world would be a poorer place and to paraphrase Yoani, “Nothing is what it seems and even names lose their meanings.”

I can’t imagine a worse fate for humanity than the inability to remember the true meaning of words, symbols, signifiers, for having lied for so long, like all dictatorships lie in their discourse, whether it’s the foreign minister or the leader, they speak of justice and solidarity, like they did in 1976 when I was born and in a place called La Cabaña they committed atrocious crimes against the opponents of the damned Revolution of 1959. And they commit them today with the complicity of the clear consciences of Cubans.

I ask of my readers solidarity with Calixto and that you offer me some objectively thought out idea, in accordance with the present circumstances, to get him out of jail where he has been thrown in the most arbitrary and deceitful way, as you sought to do for Antonio Rodiles and as many people have done before.