14ymedio, Elías Amor Bravo, Economist, 29 November 2022 — There is just over a month left until the end of this fateful year 2022, and in all countries, the time comes when economists begin to make the first estimates of what happened during the year.

##In the case of Cuba, this task is conditioned by the overwhelming scarcity of data for the analysis of the situation, which, exposed in concrete terms, means that only tourism information by month is available from the CPI.

For the rest, it is necessary to accept longer time periods, the quarter or the semester, and even in most indicators the statistical production is addressed annually. This makes the task of carrying out the analysis of the economy complicated and forces us to formulate proposals that, in many cases fall short, lacking the support of the objective data of reality.

In any case, and based on information already known and contrasted, what seems evident and recognized is that economic growth in Cuba has been declining significantly during the year.

The initial forecasts of the economy plan had established for this year a GDP growth of 4%, which remained until a few weeks ago, when the authorities (in this case, a director of the chamber of commerce) recognized at the inauguration of Fihav that the growth of the economy plan was not achievable, revising the figure by half, 2%.

It should be remembered that this data had been included months earlier in a ECLAC forecast report, where the Cuban economy had one of the lowest growths in Latin America during 2022, and was headed for a scenario even more negative  in 2023, with a lower increase of 1.8%. The regime, given the evidence of its data that it rarely discloses to the state media, was forced to recognize that the growth of the economy was reduced by half, with the impact that this has on most activities and productive sectors.

What indicators does the communist regime use to accept its defeat in terms of economic growth planning? A few days ago, ONEI published the statistic, “Sale of goods and services at retail January to September 2022” that includes information regarding the preliminary behavior of some of the indicators associated with sales of goods and services to the population, in addition to total sales and domestic production to the domestic market in CUP. It could be interpreted as an indicator of spending, of the behavior of consumer demand, which in most economies, is a powerful indicator of their behavior.

The information is included in the following Table: 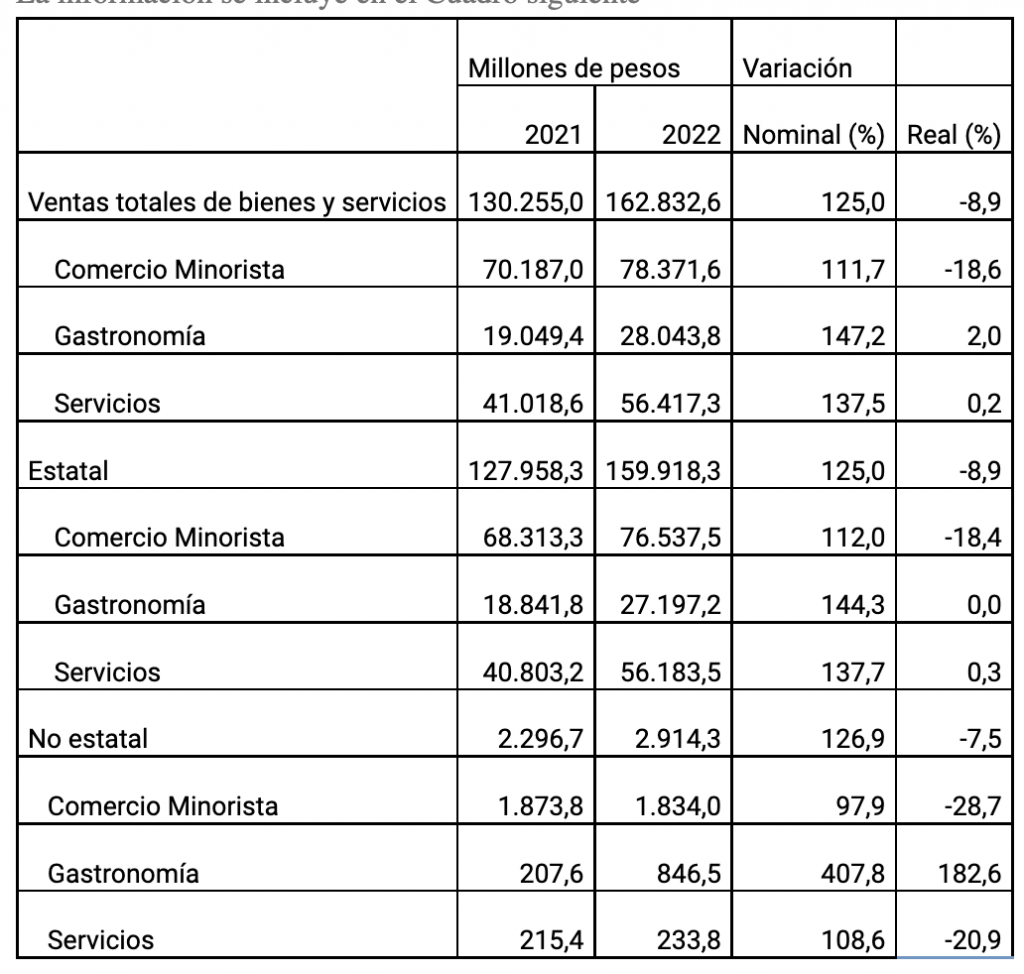 The data reveal that in the first nine months of 2022, compared to the same period of the previous year, total sales of goods and services reached a nominal or current growth of 125% to 163 billion pesos. Other spending concepts increased even more. Gastronomy 47.2% and services 37.5%. If we look at the breakdown between the state and non-state sectors, significant differences are observed. The highest growth took place in the gastronomy of the non-state sector, 307.8%.

These data could be indicating the behavior of a buoyant, powerful economy, with a sharp increase in family consumption spending, which is obviously not the case, if the reports and day-to-day news of Cubans are taken into account. Is it that statistics do not adequately reflect reality? What is the problem that causes economic data to indicate one thing and real experience another?

The culprit of these differences is the year-on-year inflation rate until September, 37.24%, and that gastronomy (hotels and restaurants) reached 44.3%. Inflation, as if it were a tax on the poorest, erodes the nominal incomes of workers and pensioners who are paid in Cuban pesos and reduces the growth of the nominal magnitudes of column 3 of the Table, once they deflate.

This correction of the current data by the evolution of prices, to obtain the real or constant data, is made because they more adequately reflect the behavior of the spending and demand indicators. When this task is performed, the data in column 4 of the Table arise and present notable differences with respect to the nominal values.

To begin with, total sales are in the red, -8.9%, indicating a notable contraction in spending demand that explains the remarkable weakness of the Cuban economy throughout the year, which breaks with any possible consumerist vision, forcing the regime to forget about the planned figure of 4% of GDP.

Sales in gastronomy must be deflated by their corresponding year-on-year inflation rate, and with it, the real variable grows by a modest 2%, which is explained by a stagnation in state gastronomy, 0%, while the non-state one increases by 182.6%. But its volume, 846 million pesos, is insignificant and barely represents 3% of the state one, 27,197.2 million pesos, Once again, economic totalitarianism pays a high price. If the regime allowed all gastronomy to be non-state, other data could have been obtained.

Finally, sales of services, corrected by average inflation, increased by only 0.2%, which in the case of non-states registered a decrease of -20.9% in the period under analysis.

These data, in particular real sales of goods and services, set off alarms and have to be incorporated into the forecast models of the economy in 2022. If they don’t improve in the last quarter of the year, which seems unlikely since inflation tends to increase, everything points to an intense reduction in the growth of the economy from real spending and demand, which is expected to be less than the current 2% and could even point to a certain recessive or stagnation period. The most intense real drop in spending occurred in retail trade in Cuban pesos, -18.6% for the economy as a whole, -18.4% in the state and up to -28.7% in the non-state.

Throughout 2022, Cubans have lost almost 20% of purchasing power in their retail stores when they pay in Cuban pesos. Poverty is a real fact.