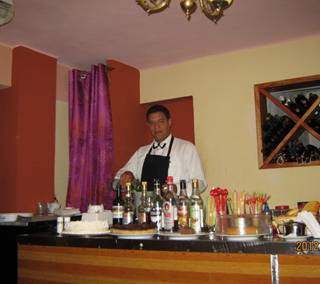 Just six months since it opened, a full house has been the common denominator for the whole half-year, for the private restaurant La Rosa Negra.

Early on Pedrito, the young owner, had to face many bureaucratic obstacles and so many others caused, unfortunately, by misunderstandings with some neighbors: that the air conditioning is noisy, that the odors penetrate the neighboring houses, that the water in their tanks is low because the restaurant’s is full. In short, the normal things that happen with any State enterprise, and that no good neighbor has dared to question until now. Why should there be this reaction against private businesses”

Sadly, it is the accumulated and captive frustration, which only seems to be given free rein when it’s a private business, forgetting that it’s nothing more than a neighbor. There’s no worse splinter than from your own stick, as my grandmother used to say.

Fortunately, this young entrepreneur has managed to negotiate all these obstacles with diplomacy and intelligence and has improved every day. Not only are the conditions of the place ever more pleasant, but the menu offerings are always getting better and more varied and the prices are considerably more reasonable than most of its competitors. The Black Rose has quickly become, in one of the most successful restaurants in the capital, already a landmark.

It’s nice to see the development of private initiative, which is ultimately what drives growth. No country gets richer because it gets more millionaires, but because the middle class grows.

Many may think that personal interests lead me to write about this new restaurant. I assure you that no one pays me for this, I do it simply for the satisfaction I derive from seeing the incipient development of private enterprise. These small establishments, businesses created with great effort and against all odds in less than favorable conditions, with good taste — and capital, of course — have been gradually changing the faded and drab image of socialism as we know it. New colors, more lighting, well-cared for gardens and areas surrounding the establishment, more cleanliness, more variety and quality are the magical elements that have influenced the success of them.

If you want to know more about this restaurant you can go to its Facebook page: larosanegradelahabana.