It is interesting to read abut the lives and ideas of the of the philosophers from Antiquity to our own time.

They are deep thinkers who, from their perspective and personal appreciation, try to to give us an interpretation of what the universe is and respond to the great questions of all times: Who are we? Where are we going? What can we expect in the future? How should we live our lives?

One of these great men was Aristotle (384-322 BC) of Stageira, Greece. He had been a disciple of another great of these affairs, Aristotle of Athens, more commonly known as Plato, and later worked as a professor in his teacher’s Academy.

Aristotle is famous for many things, but for me the most innovative and extraordinary thing he left us was the concept he called “entelechy.”

To explain what the Stagirite wanted to say with this, I am going to offer an example that could be illustrative and and from which we can take a seed of some fruit. 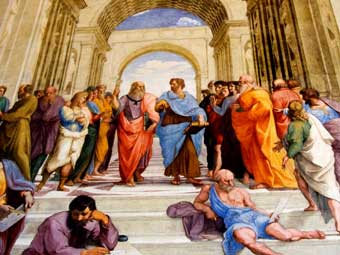 A seed has the potential to become a fruit sometime. It will first become a germinating seed, then a bush, later a flowering tree and, finally, fruits, although it’s not absolutely sure to happen in this way.

But the potential and probability are latent in it for the fact of being a seed. Whether it becomes was it was conceived for by mother nature will depend on the environments, the external conditions that surround it.

Aristotle located this same probability and potential in the human being. Man (speaking in a generic sense) is born with the characteristics that belong to him by the sole fact of being a man and than can turn him into what he was destined to be: everything is dependent whether his environment supports the conditions for his development.

This environment that allows the full development of the individual in all his potential, should be guaranteed by the group the individual belongs to, by his society and, particularly, by the State, what was created by citizens through the Social Pact precisely for this purpose.

This idea will be taken up again by Pico della Mirandola when he writes his “De dignitate hominis” in 1486, with other words and in a dialog he recreated between God and Man, the same philosophical essence of Aristotle:

I have not given you a specified place, nor your own face, nor a special gift, O Adam, so that you desire and conquer and possess your place and your gift for yourself. Nature contains other species in some laws set by me.

But you, you have no limits, you define yourself according to your own freedom, in whose hands I have place it. I have not made you celestial, nor earthly, nor immortal, so that you will be sovereign over yourself, freely shape your own form, like a painter or sculptor.

Many years later this conception will be returned to by the great thinking Immanuel Kant, German philosopher (1724-1804), born and died in Königsberg, a city in eastern Prussia.

For Kant, entelechy (which he called “human dignity”) consists of understanding that we can never treat nor be treated as a means, but always as an end and act accordingly, so that no one can use others for his own interests, in that all exploitation (whatever it may be) is illegitimate and immoral and no man is more human than another.

This is precisely the basic fundamental idea that informs the entire Declaration of Universal Human Rights, our inalienable Rights which, however much they want to hide in their reality, will end up imposing themselves, because as another Great Thinker said, this one a Cuban like ourselves:

A good rider should not let go the reins of his horse, nor a free man his rights. It is true that it is easier to be led than to lead, but it is also more dangerous. And his own exercise of them is very bright, very animating, very invigorating and very ennobling.