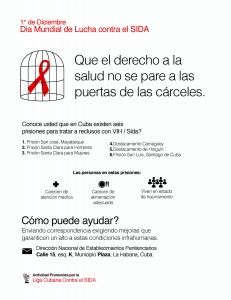 During the month of June and the first days of of July The Cuban League Against AIDS has monitored the rise of protests in Cuban jails for inmates with HIV / AIDS.

For those unfamiliar with the Cuban issue of Prisons for Inmates with HIV / AIDS, we recall that in the mid 90’s there was only a prison on the island for this purpose located in the city of Santa Clara. Subsequently the Department of Corrections was forced to increase that due to the steady increase of the disease in the Cuban prison population, and so opened new prisons, to date a total of six.

Recent protests have taken place in prisons in Santiago de Cuba, Holguin, Santa Clara and San Jose in the former province of Havana. The incidents reported in many cases by the people themselves, which reflects the uneasiness of those who in spite of what they live through await an improvement in these prison by the Cuban regime.

Hunger strikes, self-harm, attempted escapes, prison disorder, failure to return from passes, negativity toward wearing the uniform, are some of the actions carried out by those seeking to end the existing deficit in these prisons of drugs, food, and the constant violations of human rights, to put an end to cruel inhuman and degrading treatment of the doubly confined in punishment cells, and the very little required to make these prisoners the objects of constant beatings by their jailers.

Accordingly the Cuban League Against AIDS has been able to show, recently, that such incidents have increased in the Prison of San Jose where a prisoner was unexpectedly submerged unclothed in an elevated tank of water. Carrying a sign asking for food, medicines, and demanding the release of prisoners with HIV / AIDS. The name of the prisoner who performed this act of disobedience in unknown, but we are aware that remained protesting all day until the evening after having been made to drink a bottle of soda with sedative tablets caused him to fell asleep on the heights of which was lowered with military aid and a crane.

The most recent incident was staged in the same prison by a dozen females, who rejected all kinds of food for more than three consecutive days, demanding to spend an hour in the sun with their husbands or fiancés adding to this demand the necessary improvements in the prison system.

The Cuban penal population affected by this disease most commonly is serving sentences for common causes such as theft, burglary, theft and slaughter of cattle, being in a state of dangerousness, and for the alleged crime of spreading an epidemic which in many cases is unproven.

For over 75% of the Cuban prison population with HIV / AIDS the main route of infection is self-administered injections. This mode of transmission is not recognized by government agencies trying to hide one of the realities which has been known for years.

The Cuban League Against AIDS organization monitors the island and calls for respect for human rights applied to the carriers of this disease. It sends a warning call to all international organizations to demand that Havana:

– Improve the prison system for inmates sick with HIV / AIDS.

– Suspend of the use of solitary confinement in punishment cells.

– A thorough investigation to clarify the use of self-injection as a means of infection.

The Cuban League Against AIDS from this note is beginning a new campaign for the Cuban prison population with HIV / AIDS which will end on December 1st of this year as part of commemoration of World Day of Solidarity with Persons with HIV / AIDS.

The campaign will be taken to each province for the sole purpose of not stopping the right to health at the doors of Cuban jails.

Accompanying this note is the original poster of this campaign.