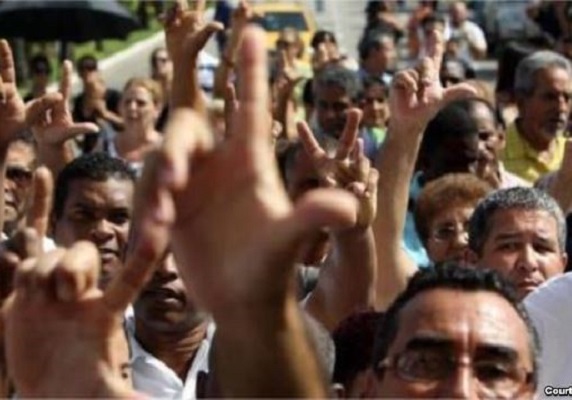 In order to “elect” there must be different political parties to choose from, and only one is legal on the Island: The Communist Party

Cubanet.org, Roberto Jesus Quinones Haces, Guantanamo, 17 April 2015 – Coming up on April 19 there will be “elections.” Many countrymen ask about the changes that the Electoral Law will introduce.

The most democratic electoral law in the world?

In Cuba there are no elections, just votes. There are no elections because in order to elect there must be different platforms, and here only one is legal. Absolutely all the delegates and deputies respond to this; that’s why it does not matter for whom you vote.

Every time one of the People’s Party (which is the “people’s” in name only) elections approaches, the official media overwhelm us citing the supposed blessings of our electoral law, according to them the most democratic in the world.

It is an illusion. The only supposedly democratic thing in our electoral system is the election of candidates as district delegates. It’s true that the residents of each of the zones into which the district is divided elect a candidate through a direct and public vote, but that is the visible tip of the iceberg. The hidden part is comprised of the multiple meetings of “the community revolutionary elements” – i.e., Party members, “combatants” (former soldiers), leaders of the Committees for the Defense of the Revolution (CDR), the Cuban Women’s Federation (FMC), etc – where those attending are directed how to block any candidacy unwanted by the regime and who to vote for.

The delegate as well as his voters lack any real power to make decisions and transform his neighborhood, and it is for that reason that the former has turned into a mere complaint clerk.

Finally, 50% of the delegates to the Provincial Assemblies from the People’s Power and the same percentage of the deputies that make up the National Assembly are not elected by the people but “handpicked” by the official Candidates Commission. In these assemblies there will never be a decent, hard-working and patriotic Cuban who disagrees with Communist ideology. So what is the democracy of this law?

A Cuba “with all and for the good of all”

The Constitution of 1976 in its preamble declares that it is the will of the government that the law of laws be presided over by the profoundly Martí desire to make the first law of our Republic be the worship by Cubans of the full dignity of man.

Article 1 states: “Cuba is a socialist state of workers, independent and sovereign, organized with all and for the good of all, as a united and democratic republic for the enjoyment of political liberty, social justice, individual and collective well-being and human solidarity.”

The drafters of the socialist magna carta deemed that such desire was fulfilled. But reality, more stubborn than any triumphalist sentence, proves that the Cuban state is not organized “with all and for the good of all,” as José Martí dreamed, but for the “Revolutionaries.” The other citizens are excluded, jailed and discriminated against. Reality demonstrates that a single political party supplanted the State and controls everything, prohibiting the existence of any other organization of that kind.

In such conditions there is neither democracy nor political liberty. There is no social justice because in order to access certain jobs and higher education, loyalty to the Communist Party and the Revolution is demanded and because increasingly the State abandons the elderly, the disabled and low income people.

There is no individual well-being because workers receive miserable wages and have to buy basic products in a currency other than that in which they are not paid and that is worth 25 times more. There is no collective well-being because public services degrade further every day, and health and education are in a precarious state. There is no human solidarity because there is physical assault and intolerance in the face of diversity, as was demonstrated once again at the recent Summit of the Americas. Of what full dignity of man do the Communists speak?

What many Cubans do want

What many Cubans do want is to enjoy the same civil and political rights that the citizens of 34 other countries in the continent have.

They want to decentralize the State’s absolute power and to build democracy from the neighborhood up because sovereignty lies with the people, and they have to have the means to express it. For that reason it is spurious for a leader who has not been elected by ordinary people to make a decision or to believe that he expresses the interests of an entire people without consulting the opinion of the citizens.

Cubans want to elect people who really represent them at the different levels of government and are not merely uncritically consenting.

They want all the delegates to the provincial assemblies of the People’s Power and the deputies to the National Assembly of the People’s Power to be elected in their districts through direct and secret vote, publicly verified, and that the same occur with those who lead those government organs and other important offices like prosecutors, tribunals and police units.

They want to choose the political program that most satisfies them and to elect their president in multi-party elections supervised by international agencies.

That is the desire of the majority of Cubans, and as long as it is not fulfilled, the Communists should have the decency not to talk about elections or democracy.