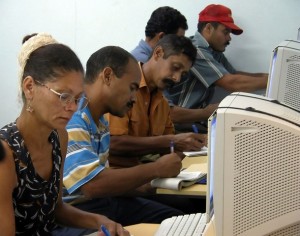 People on the street in Cuba look sideways at the recent reforms designed for the impoverished national economy. Few are counting on these changes put forward by president Raúl Castro. They don’t believe they will make the country function more efficiently.

They know what a group of Cubans think. In a survey of 48 persons of both sexes, with an average educational level of 12th grade, between 18 and 71 years of age, white and black, there was more pessimism than optimism. Many don’t trust the system. So expectations are low.

There were four questions:

1) Do you believe that real reforms will bring satisfactory, short-term changes that will improve your standard of living? 2) What do you think is missing in the government’s new economic proposals? 3) Do you believe that Raúl Castro’s administration can give a boost to our economy? and 4) Do you think the Cuban social system can generate wealth and motivate independent business people so that they will benefit from the government plan?

Thirty-nine (39) of those polled think that the much-vaunted reforms are more of the same. “It’s not the first time that the country has brought up a supposed change to put socialism back on track and make it more efficient. As I remember, it was tried in the ’70s, the middle of the ’80s, and now again. Nothing makes me think that the third time will be the charm,” said a cab driver.

The answers of the other 38 are similar in tone to that of the cab driver. They feel pessimistic about the government’s economic suggestions. They laugh ironically at the thought that changing only the polish would change their lives for the better. They doubt that General Raúl Castro can make the weak local economy function.

Even fewer believe that the present model of a collective society will generate creative and dynamic people who will produce wealth. “That’s the principle of these systems that combine Marxist ideology with authoritarian forms of government: to control man. They come with a dislike of people who make money. They don’t want there to be a class of rich people. It’s a kind of society that’s allergic to capability and individual liberty for its citizens. They are seen as enemies. They are a contradiction,” says one university student.

The 39 people polled do not expect great things from the regime’s economic update. They believe there are interesting matters that are not considered in the plan, which these days is being discussed at work places and CDR meetings in the neighborhoods.

“No one is saying that Cuban Americans can invest in the country. Also, they ought to abolish all the immigration regulations for those born in Cuba, introduce a realistic investment law that will give incentive to foreign businessmen to invest in the island. Eliminate entrance and exit permits. Abolish the high taxes for people who work for themselves. Drop once and for all the role of the State as a prison warden that must control its citizens,” adds an intellectual.

Nine (9) of those polled gave the benefit of the doubt to the government. They are not fully optimistic, but they think that the changes will bring, in the long term, a haphazard version of capitalism to the country.

“No one wants this. Socialism is a system that is purely superior in theory. If it has not shown results it’s because the human factor has failed in the practice. The Cuban revolution has been more political than economic. In order to involve a large section of the population in the changes, we should abolish absurd laws and not look at those who make money as an enemy. The reforms may fail. But there is still the question, asked by an engineer, “What if they work?”

The economic reforms launched by the government have not created a state of favorable opinion in the majority of the population. They think they are subsistence measures. That they can bring a new plate to the table. And perhaps a glass of milk.

But basically the government can’t commit to a profound turnaround, which is necessary for the economy to be efficient, robust and long-lasting. The dream of millions of Cubans. Whoever accomplishes it will be a giant.