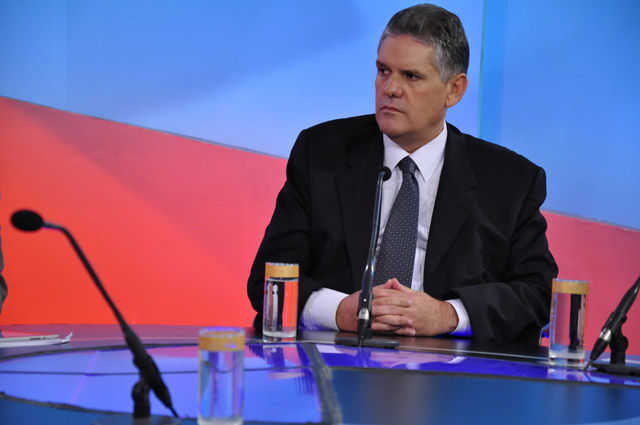 Elías Amor Bravo, Economist, June 13, 2019 — It seems the Castro regime has appointed an economics minister, Alejandro Gil Fernandez, who is actually funny. I don’t know if it was done with good intentions or in an effort to further confuse the situation, but during during a conference at the Eighth Congress of the National Association of Economists and Accountants of Cuba he said that “the import mentality accommodates and restrains initiative and creativity.”

Well, turn out the lights and let’s go! And if you are the last person to leave, make sure you close the door.

Is Mr. Gil really in a position to assume the responsibilities of his new position if he thinks this way? I have serious doubts. Let me explain why.

The regime’s obsession for what it calls “putting resources into production and taking them out of imports” represents an autocratic approach to the economy more typical of the mid-20th century than an era of globalization and internationalization.

Even in the old days, countries that imported equipment, technology and business know-how used these resources to overcome their economic backwardness, eventually becoming advanced nations. Some European countries such as Spain, as well as the Asian tigers decades later, benefited from this development model in which imports were essential to getting ahead.

The question is: How do you finance these imports when you are poor — very poor — and do not have the resources to do it? Carefully. Cuba has never done this. Before 1959, pre-financing the sugar harvest and signing trade agreements with the United States provided the country with adequate resources to finance its imports.

In this regard Cuba was at the international forefront and its economy was solvent. Under the guidance of the Central Bank of Cuba the peso and the US dollar were at parity. Cuban gold reserves were held in safekeeping by the Federal Reserve Bank in Washington. It now seems unbelievable that Cuba could been in such a position but that is in fact the reality.

The poverty preventing Minister Gill from importing equipment, raw materials, and foreign technology is the direct result of the communist model itself, which is based on a centrally planned economy and the absence of property rights.

For the past sixty years the communist regime has been unable to develop industries and activities capable of producing the goods and technologies the country needs to progress economically. The only solution is a complete change of direction. Neither quick fixes to the economic structure, or to its supply chains, nor efforts on the part of workers — no matter how much my colleagues on the island might promote them — will resolve the backwardness and inability of the Cuban economy to finance what it needs from abroad to move forward.

I do not understand why the Castro regime has adopted such an autocratic, Stalinistic approach to managing an economy that is unable to feed its people. This doctrine — more appropriate for pre-WWII fascist and communist regimes — holds to the belief that many goods can be produced domestically, thus avoiding an eventual “accommodation” of imports, or something like that, at least as it is explained in the Communist Party newspaper Granma.

Minister Gil is wrong in his assessment on the role of imports in an economy such as Cuba’s. First, he is wrong to claim that “imports prevent industry from developing.”

Just the opposite. Industry needs support from oversees to modernize its equipment and to be more competitive. It needs to bring in the latest technologies, or least technologies that are becoming somewhat obsolete in the most advanced countries. Industries need intermediate goods, such as raw material and fuel, and capital equipment from abroad. Without importing these things, industry falls behind, deteriorates and ultimately disappears.

The minister is also mistaken when he says that “the debt burden is greater than the economy can support”. The origins of Cuba’s foreign debt are many. The minister knows this. For example, there is one type of debt that has its origin in the superfluous expenditures squandered each fiscal year to sustain unprofitable state-owned companies that must be sudsidized to remain in operation. There are also the outlays for the “basket of goods,” subsidized consumer essentials which are distributed to the public little by little. This type of indebtedness is a heavy burden that grows and grows uncontrollably to the point of exhaustion.

In essence, since this type of debt does not generate wealth, it does not add value to the gross domestic product. However, if foreign debt is used to modernize a country’s business technology, communications, water supplies and electricity, then there will always be financing available. The problem is that the Castro regime long ago lost its credibility as a borrower and no lenders want to see their money being misspent. This is something you should consider, Mr. Gil.

You know the solution. The economy is broken and doors have to be opened so that private business initiatives come in and take control of various sectors of the economy. It is pointless to talk over and over about “quality supply chains” because economic development and modernization in the 21st century is global and international, and cannot be conceived in local and territorial terms, much less in autocratic terms. That is all part of the past.

And one more bit of advice: the economy is not a “battlefield” and does not require some “frontline” or soldiers taking up arms. You have to forget all that. An economy is the art of efficiently committing resources, which are sometimes scarce, to achieve a wide ranging set of goals. And to achieve this objective and promote economic prosperity and sustainability, the only thing you really need is the desire to do things right and not recklessly obsess over a script that no one is following anywhere else in the world.

You only have to look at what is happening in China or Vietnam. They have managed their debt really well and the results speak for themselves. Even when Vietnam was a net importer, the population frequently suffered from famine. Since adopting its policy of Doi Moi,* not only is rice no longer an issue, but Vietnam now exports it to other Asian countries. You know what the solution for Cuba is: Doi Moi and private ownership of land.

Mr. Gil should be made aware that that economics teaches us that a country does not have to produce everything it needs, only things in which it specializes and which are cost competitive internationally. Specialization creates the income needed to buy what you need from the global marketplace, and makes structural transformation and economic development possible.

Cuba once followed that model, which was a real success prior to 1959. I do not know if it will come back but something must be done. And the longer it takes, Mr. Minister, the worse it will be.

*Translator’s note: a set of reforms adopted in 1986 by the communist government to create a market-oriented socialist economy.