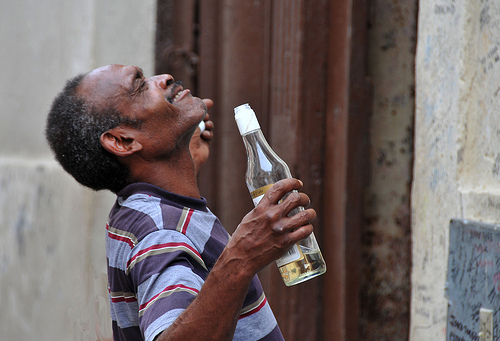 As with everything in the island of the Castros, there are two standards for alcoholic beverages. If you travel outside world with an official passport, or receive dollars or euros, life on the green cayman is much more pleasant.

With hard currency you can eat in an established restaurant such as El Aljibe on 7th and 24th Streets in Miramar, or Los Nardos across from the National Capitol. Or acquire stuff with registered trademarks from China.

You can have a decent, furnished house. Or a refrigerator stocked with beef and shrimp. And at night treat yourself to a Heineken imported from Holland, or the domestic brands Bucanero and Cristal. You can also get rums with the Havana Club label, or the wonderfully aged Caney and Santiago, produced in the former Bacardi factory in the eastern province of Santiago de Cuba.

Drinking rum or beer is almost a national sport. Any event, family party or special occasion will serve as a pretext to open a bottle. Rum allows people to relieve their daily stresses and romantic woes. To admit their doubts about the future of the country. To speak openly about the health of Hugo Chavez and Fidel Castro. To discuss baseball statistics or NBA matches.

According to official statistics 45.2% of the Cuban population over the age of fifteen consumes alcoholic beverages, with a 7% to 10% degree of prevalence. Alcoholism and prostitution are two of the the topics on which independent journalists report most often.

The difference between an affluent drunk and one of limited financial means is striking. While generals and government ministers enjoy ample tumblers of Scotch whiskey or Jack Daniel’s, the neighborhood drunks have to make do with the explosive rum sold in bulk at some liquor stores.

The last rung for someone who takes pride in belonging to a certain alcoholic culture is drinking homemade booze. It is the worst of the worst. Truly the drink of the forgotten. It is made in a sordid backroom or house in the neighborhood. Industrial charcoal or cow dung is used to refine this cheap liquor. It is pure fire. Tears well up when it goes down your throat. It’s potency makes it suitable only for hardened alcoholics or suicides.

Among the masses it goes by different names – trainspark, tigerbone,drop-your-bloomer, jump-backwards. Blacktears is a lethal combination of boric alcohol and Homatropine eyedrops filtered through cotton.

A bottle of this diabolical stuff costs ten Cuban pesos, while the exquisite Santiago rum – the best in Cuba today – is worth between 7.00 and 9.60 convertible pesos – some 175 to 230 Cuban pesos, or almost half the average monthly salary.

When it comes to drinking, in Cuba there is no distinction as to age, race, sex, ideology or religion. It does not matter what your educational or cultural level is. There are social drinkers who do things in moderation. When they feel they are at the point of getting drunk, they know it is time to stop.

Others drink like pirates – bottle after bottle – as if they were trying to beat a Guinness world record. Everyone drinks as his pocketbook will allow. Rum and beer appeal to intellectuals, dissidents, hookers and party activists alike. It is rumored that President Raul Castro likes to drink vodka – Russian and perfectly pure.