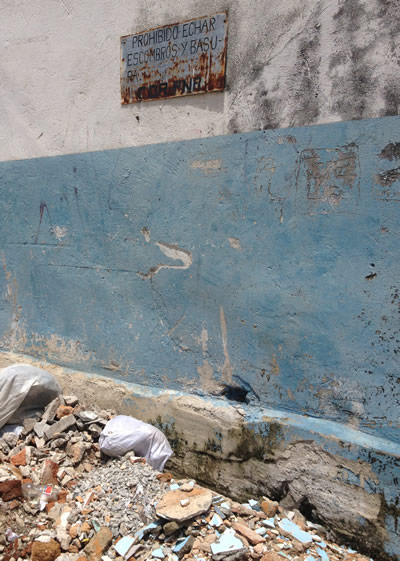 The theme of social indiscipline occupied an important space on the national television news this morning. Music played too loud, trash thrown off balconies, graffiti on public walls, the rubble in the middle of the street, and many more examples from daily life, especially in the country’s capital. We learned that there are “Operations Groups” dedicated to detecting and punishing such irregularities.

Many of these indisciplines, dare I say most, are the reflection of a combination of two elements: on the one hand the lack of conditions to make things as they should be, and on the other the lack of civic education that leads citizens to behave in an uncivilized way. I have seen some tourists (obviously foreigners) walk for blocks and blocks carrying the little paper wrappings from peanuts, while local pedestrians happily throw them anywhere at all. Neither ever found a bin to dispose of their trash. And some residents, when they’re forced to solve their problem of access to the sewer, have had no choice but to cut into the street, thus creating a new pothole in the city.

In fact, one could say that “nothing justifies” the commission of an indiscipline that affects the community, but the truth is that many of them have at least one explanation. And, indeed, there is an overarching general explanation related to this “acimarronada“* conduct of thousands of Cubans every day, and it is the lack of resources available to address our problems, coupled with little ability to participate in the decisions that affect society as a whole.

As always, duties and rights must go together. When the State only seems interested in citizens fulfilling their duties, it entrenches them in their rights and they ignore all the rules. Such a situation is a breeding ground for other excesses, unjustifiable and difficult to explain.

*Translator’s note: “Acimarronada” comes from word cimarrones, runaway slaves. It refers to the way Cubans pretend to do and think one thing, but in reality are always thinking of fleeing.