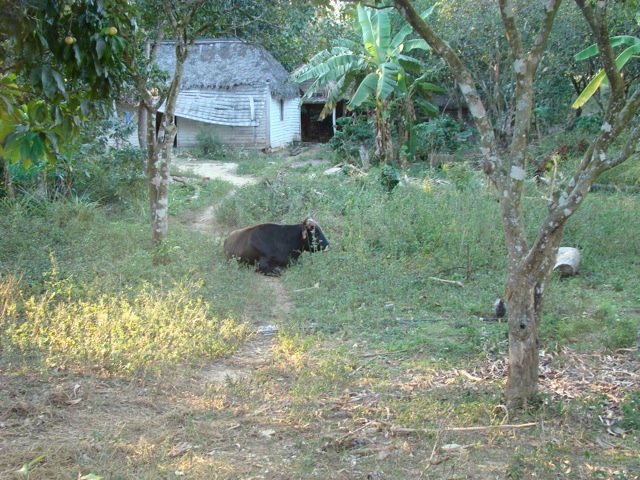 Just a few days ago, December 9, 2012, Decree-Law 300 came into effect, authorizing the leasing of idle state lands under the concept of usufruct. The new measure repeals Decree-Law 259 of July 2008, whose ridiculous results led to its repeal by the State Council.

Judging by the official criteria reported in the press, now the land will indeed produce. Among others, the legal director of the Ministry of Agriculture said the new Decree-Law will strengthen the process of leasing vacant land and ensure continuity and sustainability in its use; meanwhile the director of the National Control Center of Land, under the same ministry, ruled that the application of the law will allow an increase in food production.

These triumphalist statements do not take into account the relationship of the recent Decree-Law with the background of the agrarian problem in the country, especially with regard to land tenure and its efficient exploitation.

In the period between the end of the War of Independence of 1895 and the great expansion of the sugar industry between 1918 and 1924, agricultural property in Cuba suffered a considerable shift to the detriment of small and medium producers with tens of thousands of evictions.

The result of this process is reflected the 1946 census: of the 142,385 farmers who were in the country with 165 or fewer acres (equivalent to the Cuban land measure of 5 caballerías), which represented 24% of the arable land, only 48,000 were homeowners, while the remaining 76% of the land was concentrated in the hands of large national landowners and foreign companies.

With this distribution big landowners were not interested in intensive use of the land, while nearly a hundred thousand tenants, subtenants, sharecroppers and squatters,were unwilling to efficiently produce on land they did not own.

With the Revolution of 1959 the socialist State monopolized land ownership and introduced central planning. These two factors, property and planning, explained that half a century later, despite the various measures, more than one-third of the land concentrated in the large State-owned estates, remained and/or became idle.

After multiple failures in the attempt to make State-owned land produce, in the year of 2008 Decree-Law 259 was enacted, which delivered 3.7 million acres of the land to leaseholders (a large part of which remains unproductive). However, this legal judgement ignored the main causes of inefficiency and therefore failed to increase agricultural production.

Despite this experience, the Guidelines of the Economic and Social Policy, adopted by the Sixth Congress of the Communist Party in 2011, re-instituted central planning to the detriment of the market and refused to deliver land ownership. That is, it insists on the implementation of an economic, political and social model that has never worked anywhere.

It must be said that, although the Decree-Law 259 lacked the basic elements to produce the required shift to agriculture, its importance was the recognition that something had to change. However, that something, to circumvent farmers actually holding title to property made the economy subject to ideology, and so could not fulfill the stated purpose.

The recent Decree-Law 300 is a step forward in some respects:

1 – Before, the area could be offered in lease could be from given from 33-100 acres of land and now is extendable up to 165 acres, but only for those who already possess land and are linked to a legally established State Farm, a Basic Unit of Cooperative Production (UBPC). or Agricultural Production Cooperative (CPA).

2 – Housing, warehouses and other facilities, previously banned, are now permitted.

3 – It provides certain facilities for the hiring of a workforce through family support, temporary agricultural workers and permanent workers.

However, access to inputs and services depends on those leasing the land being linked to legally established agricultural entities; there is a manifest disadvantage to individuals in the duration of the contract and that they are also responsible as part of the lease for fulfilling State plans for livestock and unproductive trade. Such limitations are moving towards an insurmountable contradiction: make the land produce while avoiding the formation of a national business.

In turn, Decree-Law 300 does not hide the decision to maintain monopoly control over the property of the State. In Article 11 it states that the lessees can be integrated with workers on a legally established state farm, or as cooperative members with a UBPC or CPA. In such cases, “the lessee cedes lease rights over the land and additions to the entity to which he is a member, which evaluates whether or not he may continue to work the land.”

Most significant is that the lease, understood as the right to enjoy a good of others, does not get to the root of the problem. It holds great contradiction: the land in State hands becomes idle, but whomever makes it produce is unable to access it as his property.

The subordination of economic laws to the ideology of power, explains both previous failures as well as the attempt to repair previous decisions with recent measurements. These changes inform preserve the essential factors that have conditioned the backwardness in agriculture.

Its positive aspect is that, despite government intentions, in a slow and tortuous process against all odds, many farm workers are training themselves as future agents of a national business.

Ultimately the new measures lacking the necessary depth, with occasional modification, will repeat previous failures. These facts allow us to assume the Decree-Law 300 will not make the land produce and until that changes, Cuba will have to continue acquiring, at high prices on the international market, products that could perfectly well be produced in the country.