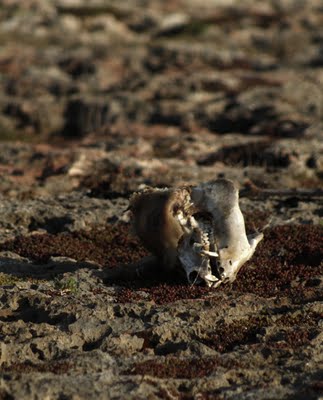 It begins happening more every day. First as an accident, then as business-as-usual. The despicable childishness of the police beating innocents (in the street and in prison) is also a sinister little game, eventually an assassination.

As the pyramid of governability disintegrates in Cuba, as the budget for repressive personnel grows (the only sector of the economy that is never depressed), as the citizenry reclaims its streets as a natural place to demonstrate, political death in Cuba will again occupy this public space that was snatched away during decades of closed-door totalitarianism (skeletons stacked in a closet under an anonymous tombstone).

From the stretcher of a polyclinic it will pass to the provincial gutters. From slander against the victims it will become an unpronounceable list of the disappeared. Each cadaver will incite a fatal cycle of the next cadaver, and the frequency of State imposed violence will stretch to infinity (with replies from the population against such out of control authority, more deranged than despotic).

I just woke up this morning with the funereal fanfare on my cell phone. Martha Beatriz Roque reports in near real time the death of Juan Wilfredo Soto Garcia (46), member of the Central Opposition Coalition, beaten last Thursday morning by several police officers in Vidal Park in his city of Santa Clara, while they arrested and handcuffed him (these outbreaks of sadism are often spontaneous because of the low moral nature of those who are supposed to be agents of public order). From the Third Station of the People’s Revolutionary Police they had to move him immediately to the Arnalso Milian Castro Hospital, decadent and wickedly free as is the entire national health system, where very little could be done to improve his critical condition.

It is Sunday, Mother’s Day, on the Island and in the world. On the bed of our room the horizontal body of my septuagenarian mother snores with emphysema and more or less references her imminent image within a coffin. Every time I take notice of this image I can’t help but lie next to her with my almost forty years, trying to transmit some of my delirious life force, reviewing our little neighborhood lives with unfathomable sadness, so attached before (when my father was alive) and now so distant on an intellectual level.

And my mother, big heart and all, was a servant in peace as in capitalism as in the Revolution (her noble soul will remain so even in eternity) while I, with cynical brick un my sternum, became an extreme writer who does not fit into the pedestrian logic of this country. My mother knows and prays trembling on her knees every night for me, before and after taking a deadly aerosol for her asthma. I know she would give what remains of her existence if I would never end up like another Orlando (Zapata Tamayo). As long as no one in uniform (or in plain clothes) makes an end of me as was done to Juan Wilfredo Soto Garcia today, in honor of the hyena mothers of our nation.

It will begin to happen every day. First as usual, then like we failed to stop in time in the name of our children. Not my mother (it’s obvious the prayers are not enough). Nor I (writing becomes humiliating in the face of the horror).