14ymedio, Madrid, 7 December 2022 — The consumer price index (CPI) had its highest growth of the year this October in Cuba, with 4.21%, according to data published this Monday by the National Office of Statistics and Information (Onei). At the end of October, Cubans paid 39.73% more than a year earlier for the goods and products they consume. Monthly inflation in October exceeded the two previous records, May (3.55%) and April (3.54%). Since January this year, prices have risen 28.76%.

If the data is broken down, it becomes clear what citizens already know: the increase in food prices is growing without measure, 62.73% in one year. The section on food and non-alcoholic beverages represents 78.88% of total year-on-year inflation. Regarding the accumulated so far this year, the data is 45.16%.

They are followed by restaurants and hotels, with 11.33%, and goods and services, with 2.93%. The rest barely contribute to raising the overall CPI. “Cuba registered in October 2022 the largest increase in food prices in the last 15 months. Food prices grew by 7% and ’explain’ almost 80% of the general increase in prices for the month, confirming that the country is mainly going through food inflation,” said Cuban economist Pedro Monreal, who regularly analyzes the data on Twitter.

The specialist said that, although the official data for inflation are not as high as the previous year, general year-over-year inflation in food alone is 62.73%. For all inflation for the year the total number of 45.16%.

The Onei data breaks down the section by product and pork is once again the greatest contribution to the rise in prices in its division. It rose 4.17% in the last month, but its contribution to the monthly CPI exceeds 25%. Rice rose 4.18% in October and its effect is 7%, while ham, with 5.2%, influences 2.5%. The section closes with eggs (2.4%) and garlic (3.2%), whose shares are 2% and 1.6% respectively.

The document also highlights the foods that increased the most this month — black beans, a staple in the Cuban diet, showed the greatest increase with 14%. Pork, poultry, ham and mutton are next, confirming the enormous problems Cubans have in buying protein of animal origin. 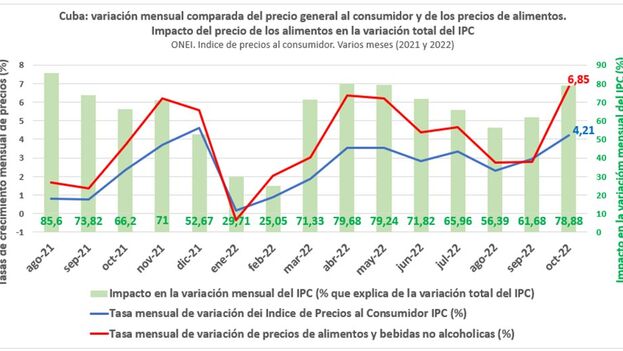 Regarding the other areas that most influence the monthly variation effect, restaurants and hotels grew above all in snacks (7% and an effect of more than 9%), lunch and dinner (6.2% and 8 .1%) or prepared food to take away (6.7%, although with an effect of only 0.7%). Soft drinks (4.6%) and breakfasts (4.3%) also rose considerably, although their influence on the increase in this group linked to food is less than 1%.

The rest is goods and services, where toilet paper stands out with a variation this November of 9.5%. The same occurs with hair dyes (4.7%), deodorant (2.26%), manicures (4.7%) and haircuts for men (4.21%). The weight of none of them, however, is substantial for the effect of the CPI variation, all remaining below 1% also although the total contribution of this section is close to 3%.

Regarding other areas, the monthly increase in Education prices is noted, 3.15%, while the number is 1.75% for alcohol and tobacco.

But the year-over-year increases from October 2021 to October 2022 are the ones that best reflect the deterioration in the life of the population in the last year. Although prices for recreation and culture have increased by more than 5% so far in 2022, and when compared to October 2021 the rise is dizzying, with 67%, the highest, even on food.

The year-over-year variation is very high in almost all the areas, so that only clothing and footwear, health and communications remain below 5% and all the rest rise by 10%, highlighting transportation, which is 17% more expensive than a year ago, an impact that hurts the family economy, although the data seems scarce when compared to that 63% of food.

In recent months, the official Cuban press has insistently and prominently published the high inflation in the Eurozone, which has been much higher than usual – especially since the start of the invasion of Ukraine and the rise in prices of energy – although it barely reached 10.6% year-on-year in October, its highest in more than two decades.

This November 30, the most recent data was released, which for the first time in a year and a half gave a breather, falling to 10% year-on-year. Energy (35% year-on-year increase) continues to determine the worst indices, which come from the Baltic countries, which are more dependent on Russia (Estonia, Latvia and Lithuania exceed 21%), and the best, with France (7.1%) and Spain (6.6%) closing the table. European consumers have the perception that food has become much more expensive and this is the case despite the fact that it rose 13%, 50 points below that in Cuba. Cubadebate has not published these figures.