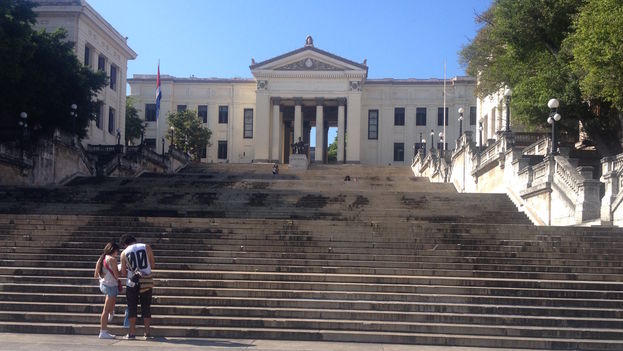 14ymedio, Havana, 10 June 2021 — Finding Cuba among the 2022 university rankings published by the British company Quacquarelli Symonds is a daunting task. Universities in the U.S. and U.K. are once again at the top, followed by many others in the rest of the world. You will have to go far down the list, however, to find the top-ranked alma mater in Cuba, the University of Havana, which finds itself in the 501-510 category (out of a thousand).

The second highest ranked Cuban school, in the 531-540 category, is the Central University “Marta Abreu” of Las Villas in Santa Clara. The third highest is Havana’s José Antonio Echeverría University of Technology, in the 1,001-1,200 category. The official news agency Prensa Latina seems to have been impressed by these numbers. It published an article entitled “Three Cuban Universities among the World’s Most Prestigious”.

The official news website Cubadebate was more circumspect. Its headline read, “Three Cuban Universities Listed in 2022 Edition of the QS World University Rankings.” What was most noteworthy, however, were the seven comments at the end in which readers expressed pride in the superiority of the country’s educational system or in the particular institutions where they had studied if they had been ranked as “one of the 1,300 most prestigious universities in the world.”

The University of Havana now returns to the position it held in 2020, after having risen to 498 in 2021. The decline of the country’s most important center of higher learning has been precipitous if one takes into account that as recently as 2015 it held a respectable 83rd place.

In the global context, Latin America is not the highest ranking region. Not until you come to 69th place do you find one of the continent’s school’s, the University of Buenos Aires. Next on the list is the National Autonomous University of Mexico at 105, followed by the Universiity of Sao Paulo at 121, and the Catholic University of Chile at 135.

Topping the list globally (as it has for ten years) is the presitigious Massachusetts Institute of Technology (MIT), followed by most of the traditional American and British universities.

Among the most striking things about this year’s rankings is the rise of Chinese universities, two of which are in the top twenty, in contrast to those of Japan, almost half of which fell.

London-based Quacquarelli Symonds is a company specializing in education and overseas studies. It is one of the most widely recognized firms of its kind in the world.