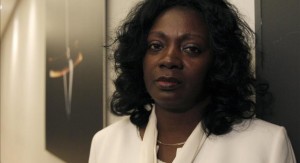 This afternoon, on her return from the Netherlands, Lady in White Berta Soler was arrested in Terminal 3 of José Martí International Airport in Havana.

Her husband, Ángel Moya, a former prisoner from the Group of 75 from the 2003 Black Spring, was waiting for her at the airport along with other family members and Ladies in White, who were not able to see her, because Berta was taken out through a back door and put in a State Security car, where they kept her for close to half an hour, and then later took her to her house where she arrived around 6:00 in the evening.

Cubanet spoke with Soler via telephone, and she related the incident which started when State Security agents, dressed as Customs Agents, started to provoke her. Berta responded to the provocations with shouts of “Down with Fidel, Down with Raul,” in the presence of foreign tourists. The agents then violently dragged her from the area.

Berta told Cubanet that she wasn’t afraid to say the same things in Cuba that she says in Holland or any other place in the world.