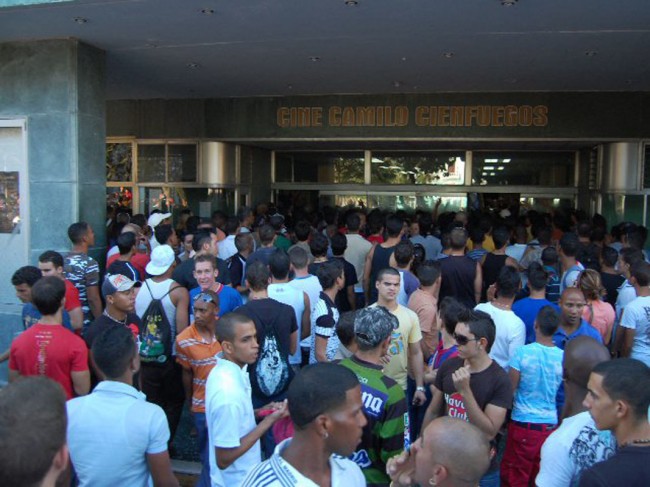 A ringing youth protest took place in Villa Clara, about 180 miles from Havana. Around a thousand young men paid three pesos in national money to see the match between Barça and Real Madrid, in a movie theater beneath the Hotel Santa Clara.

Instead of the transmission of the classic Spanish league, they showed a Cuban documentary. Meanwhile, in a neighboring locale, that could enjoy the match for 5.50 convertible pesos (about $7 U.S.). They started stomping, yelling and booing.

Tempers were getting hot. And in addition to anti-government slogans, there were acts of vandalism, breaking chairs and decoration. Within minutes, scores of cars and dozens of cops arrived. Some 70 arrests were reported, including the manager of the movie theater.

Almost all were high school and college students, perhaps fans of the Real Madrid, who meet in the Parque Vidal, facing the scene of these events. Villa Clara is the most soccer-mad province in Cuba, in particular Zulueta, one of its municipalities.

That happened Monday, November 29. Two days later and about 280 miles away from Santa Clara, in Bayamo, another provincial capital, this time Granma province, the opponent Yoandri Montoya reported the stoppage of the horse-drawn carriages, one of the most popular means of transport in the city.

The drivers holding licenses agreed to stop in protest of the raise in the monthly tax, from 120 pesos (5 dollars) to 571 pesos (24 dollars). When they increased the fares to the passengers by one or two pesos, they refused to pay double.

Despite pressure on the part of the Party authorities, the police and security, the drivers stood firm in their demand. Certainly, one of Cuba’s most popular songs is called To Bayamo by Carriage.

In Puerto Padre, in Holguin, another eastern province on the island, the protests came from pedicab drivers, who are prohibited from parking in and visiting the sites where the tourists usually are.

According to a source who didn’t want to be identified, in a Santa Maria del Mar nightclub, in a beach area outside of Havana, a discussion about entering the place ended up in a brawl, where there was no shortage of shouts against the government.

Recently, the national television news broadcast a story in which farmers were openly critical because the loss of products due to lack of transport. The situation promises to go further, with rising unrest and discontent among workers and the population in general. But also because of the alarming waste and disorder among leaders and officials.

This is the case with more than 300 temporary homes built on a coastal strip of Corralillo, Villa Clara. They were built using State resources of dubious origin. It was not reported by a foreign correspondent or an independent journalist. No. The one who reported it was the newspaper Granma.

Photos: In the first, from the magazine Ideal, young people at the entrance to the movie theater in Santa Clara where shortly afterward the protest occurred. In the second, taken by Yoandri Montoya, we see the line of carriages stopped in the street in the city of Bayamo, Granma province.