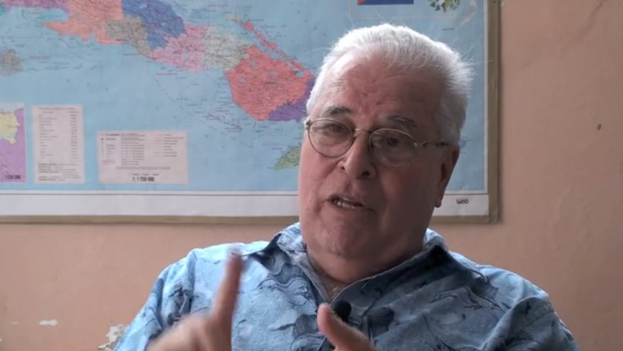 14ymedio, Reinaldo Escobar, Havana, 10 December 2014* — Coinciding with the observance of International Human Rights Day today, we spoke with Elizardo Sánchez, spokesman for the Cuban Commission for Human Rights and National Reconciliation (CCDHRN) in Havana to review the current situation on the Island.

Q:  Today the whole world commemorates Human Rights Day. What is the situation in our country at the close of 2014? Do we have reasons for hope or for worry?

A:  The general scene of civil, political, labor and other fundamental rights continues to worsen. Although the rate of detentions for political reasons has diminished in recent months, this is because the government has understood that this type of arrest portrays a very negative image. It did the same before when it decided to reduce the number of political prisoners, which is currently at around 110 persons.

Nonetheless, the government has not reformed any laws, and it has not given up its repressive and threatening mission against all of society. Therefore, it cannot be said that the situation has improved. Unless a miracle occurs, it will continue to worsen.

Q: What are the repressive methods which are most used at this moment?

A:  There has been a metamorphosis insofar as repression for political reasons is concerned. It no longer consists of lengthy prison sentences, or even of extended detentions. Instead, what occurs frequently are short-term arrests with the added element of other forms of intimidation, such as vandalism, including rocks being thrown at houses or residences being ransacked. There are also physical aggressions, which have increased throughout the year, be they overt or covert.

The repressive apparatus can be quite creative in its activities, such as taking the clothes off activists on some remote highway–or leaving them without shoes, which results in these people having to walk many miles barefoot to get home. This is in addition to the psychological effect inflicted on any individual when part of their clothing is taken from them.

Q: The Cuban government has called for this day to be observed throughout the country. How do you assess this new attitude?

A: We have been following the official media and we heard their calls for this day to be observed in parks and public places. Doing so, they neutralize any initiative undertaken by the independent civil society. An example is the announcement by the Ladies in White to meet today at the centrally-located corner of L and 23rd Streets. Very likely, this event will be quashed. The government will try to not have so much recourse to detentions, in keeping with the repressive trend this past year, 2014.

Q: Do you believe that Cuba will one day come to be a referee of human rights, even a regional watchdog to ensure their implementation?

A: This is the dream of many of ours. But, unfortunately, Cuba is today the black sheep of human rights within the inter-American sphere and the world. This is so because Cuba encourages abuses and blocks any attempt to bring forth certain complaints to the United Nations, as in the case of its complicity with the regime of North Korea.

Q:  Would you say that there is an International Committee of Human Rights Violators?

A: The great violators of human rights tend to act in conjunction with the rest, shielding themselves behind each other and lending mutual support. That is, not only is there a negative situation maintained within the country, but the Cuban regime provides negative leadership at the international level, much more than any other government does. This is quite contrary to the leadership role that the Republic of Cuba took in the drafting of the Declaration of Human Rights in 1948. Our diplomats at that time were second only to the French and the North Americans in terms of leading that task.

We therefore hope that Cuba will again become a bastion in the defense of human rights, and that the whole infrastructure that the regime has in place today for its own ends will help to create congresses that promote respect for fundamental rights at the continental level. May those halls and convention centers provide space for the formation, popularization, protection and training of human rights defenders throughout the world.

*Translator’s note: This interview took place a week before Barack Obama’s announcement of the re-establishment of diplomatic relations with Cuba.