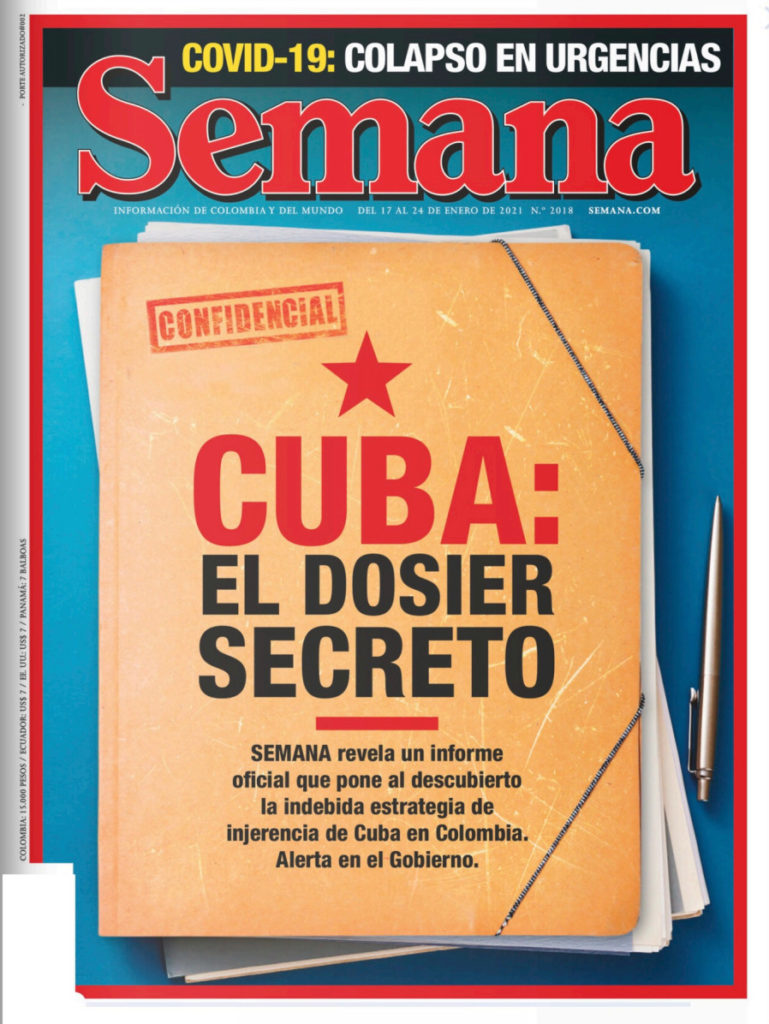 14ymedio, Carlos Alberto Montaner, 29 January 2021 — It appeared in the weekly Semana. They published a secret dossier, written by the intelligence bodies for Colombian President Iván Duque. This happened after the entry in the publication of the “Gilinski Group.” The sensational content reveals Cuban manipulation and interference in internal political affairs. Semana is a very important Colombian magazine directed by journalist Vicky Dávila.

Colombia is in the sights of “the Cubans.” Naturally, the president of Cuba himself, Miguel Díaz-Canel, has denied it, but the mark is very clear. Why is Havana dedicated to conquering Colombia? For at least three reasons. Because they already rule in Venezuela and the country has been thoroughly looted and destroyed. Cuba needs to replace the sources of oil supply and economic funds. The Island has an absolutely parasitic and unproductive system at the service of the military and doesn’t want to change it.

Second, because it counts on old apparatchiks like Gustavo Petro and Iván Cepeda. It’s no longer necessary to knock down the old structures of the Republic with cannon fire. It’s enough to participate in the elections and win. The Quislings are inside the country, as happened with Chávez and Maduro. And third, because Cuba has always done it and has done it “well.” Fighting bulls charge because they charge. It’s not necessary to find the guilty ones or play psychoanalysis. It’s in their nature.

Iván Duque will have to decide what to do with the Havana regime. He already knows that Cuban ambassador José Luis Ponce Caraballo is a smiling and skilled intelligence officer trained to penetrate and win friends, as former Cuban intelligence officer Enrique García, exiled in Miami, told me. And besides, he knows that Colombia is a desired target because of its oil production (although it has diminished substantially), and its ability to produce food for the hungry Cuban people.

If he breaks relations with Cuba, “the Cubans” assure sotto voce, they will release their internal pack of dogs, including the ELN, created by them half a century ago. But if he doesn’t, Cuban political operators will find a way for Petro to win the election. “Chávez had less than 5% when we started to operate in 1998. At the end we defeated Henrique Salas Römer by a wide margin,” they say with pride.

If Cuba conquered Venezuela when Fidel was alive and there was some hope that it would improve the quality of life of the Cuban people, today there is almost no one on the island who thinks the same regarding Colombia. All have watched with fear the gradual destruction of the country. The plummeting drop in oil production. Caracas’s inability to produce food or to meet its financial obligations. The blackouts. The sudden exile of almost six million Venezuelans. In short, they have seen in Venezuela what happens when the Cuban model is copied.

What’s the purpose of subjecting the people of Colombia to Venezuelan or Cuban horror? Why should they take the same path if Cubans are rehearsing or studying how to eliminate the Soviet model copied from the USSR in the sixties, when the USSR existed, and when Fidel, Raúl, Che Guevara and a dozen “revolutionaries” more believed the tale of Marxism and imposed an implacable dictatorship? What will they do after destroying Colombia? Will they try the same in Brazil?

Joe Biden administration’s officials in charge of Latin American affairs should ask themselves these questions. Over many years, since Clinton and his successor George W. Bush administrations, they have invested billions of dollars in strengthening Colombia, an effective and sincere ally in the fight against drug trafficking and for the preservation of democracy. Will they allow all that effort to fade away? Will they allow the sacrifices and the deaths to be without a purpose?

One of the symptoms of Third-Worldism is to completely ignore the predecessor’s acts of government. Not everything Trump did was wrong. One of his last decrees was to include Cuba once again among the nations that sponsor terrorism. Presumably, President Obama hastened to eliminate the description of the Cuban state as “terrorist,” thinking that the good intentions of one of the two contenders were enough for the other to change its behavior. He hadn’t realized that fighting bulls are programmed to charge. It’s their nature.